Yesterday I spent several hours with Yoneyu-San, a full geisha and my Onesan, a senior maiko. They are my sisters at the Yoshiwara Okiya. My Onesan and I listened to Yoneyu-san discuss many aspects of being geisha and shared a lot of information about kimonos. For example, a white kimono is only worn at weddings and at death. Black kimonos are generally formal, but a completely black kimono, without a crest is for funerals only. The style of kimono varies with the rank you achieve on your way to becoming geisha, as does your makeup and hair style.

While chatting with my sisters at the shrine in the Gion hanimachi, I took a few photos but I’m already at work on a photo study of the hanimachi (geisha district) and will also photograph geisha shows. 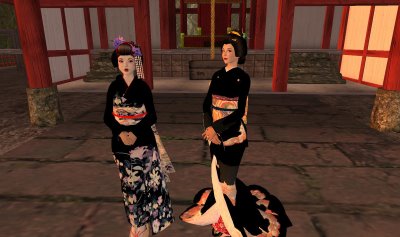 A photo of my Onesan (Miyuki-san) and Yoneyu-san.

The photo is me and Onesan, also at the shrine in Gion.

I’ve learned many things about becoming geisha and I’m practicing my new skills, but I have a great deal left to learn. I won’t be describing the training or personal interactions in this blog, but I will be telling stories as I move along in my training. I hope to photograph the next geisha show in detail because each show has it’s own uniqueness and setting.

Anyone who is interested in attending our shows, including the entertainment at the ochaya (tea house) should join the Little Yoshiwara group as a patron. It has a Join button so anyone can join.

I'm an avatar from Second Life and Xbox gamer. I wrote the sci-fi novel The Temporal Expeditions, and am working on book 2 of trilogy.
View all posts by Yordie →
This entry was posted in Features and tagged Geisha & Samurai, Role Play, Second Life. Bookmark the permalink.