My First Performance in Geisha Show

I made my debut in a geisha show at our Burning Life exhibition on Sunday. I need to start by saying I was a nervous wreck anyway, but there were last minute changes and issues with the BL sim that took my stress to a new level. Fortunately, my Onesan was able to create solutions to each of the issues and the show went off rather well. In fact, Leanna thought it was very nice and even gave it a “Bravo”. (Photo of Miyuki-san, my Onesan to right.)

My part of the show was the recital of a story from Japanese folk lore. The theme of our show as celebration and happiness, and my story was called, “The Story of the Old Man Who Made Withered Trees to Blossom”. Following are some photos from our show, that’s me, second from the left. 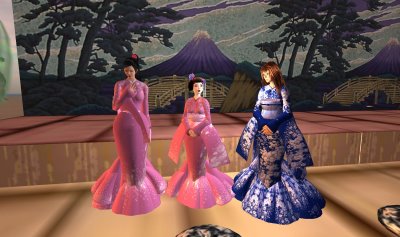 1 Response to My First Performance in Geisha Show