Yesterday, I did another photo shoot in my garden. This time it was with my new Onesan (right), Suzume-san and geisha Suzuko-san. Today, both Suzuko-san and Onesan will have a joint eri kai ceremony. Onesan did not have a ceremony when she became geisha, so this will be a special treat for her. I’ll try to get some more good photos. Below is a photo of Suzuko-san and Suzume-san standing together in their formal kimonos. 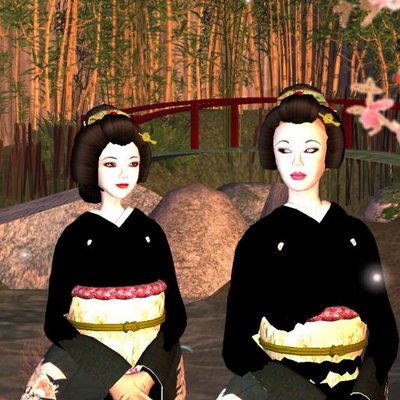 During the shoot, my neighbor Helo Jaxxon joined us. Unfortunately, he is selling his plots of land and I decided to buy one closer to our hanamachi. Also, Onesan will be buying the other plot. I’ll be moving my garden and selling the land in Gayltsen and I’m not looking forward to all the work.

I'm an avatar from Second Life and Xbox gamer. I wrote the sci-fi novel The Temporal Expeditions, and am working on book 2 of trilogy.
View all posts by Yordie →
This entry was posted in Journal and tagged Geisha & Samurai, Photography, Role Play, Second Life. Bookmark the permalink.