I finally ran out of steam on Sunday evening, but it was a pleasant ending to a long weekend. Thanksgiving and the virtual four-day weekend has been my favorite holiday since I became an adult. I spent about half of my holiday in the real world, but by Saturday afternoon I was back in-world and gearing up.

Since my promotion on Wednesday night, I had been writing a story for my misedashi, and by Saturday afternoon I wish I’d chosen a simpler subject. Nonetheless, I got a handle on the story and was back into full swing in Second Life. I attended unique geisha show at Hosoi Ichiba’s snow covered Theater. Geisha Masumi-san directed the show which included seven sisters and stories of winter, and as I’ve come to expect, my sisters performed perfectly. There was a large audience, maybe 30 avies including Okasan and Amiryu Hosoi (owner and creative genius of Hosoi).

In the evening, my misedashi was held at the Yoshiwara ochaya (tea house). I was a bit nervous as to whether we’d have much of an audience because the show was announced only a couple hours earlier; however, we had a full house. My onesan, Suzume-san played my favorite instrument, the shamisen, as I danced and told the story of Matsuo Basho, the famous Japanese poet who perfected the haiku. I wanted to tell Basho’s story because he was not only a great poet, but also a wanderer and explorer with whom I feel a kindred spirit. 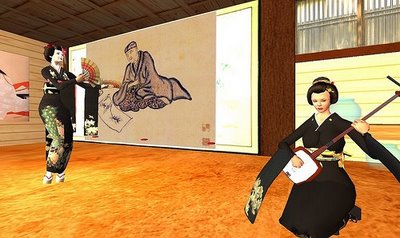 I was very happy that some of my bluesy friends took a chance and came to the performance. Hehe. I mean, a geisha show is quite a culture shift for most blues enthusiasts. Leanna & Mentone and Magi & WT came in kimonos and samurai outfits. I especially appreciated that. Even my freinds Froggie and “Dina” came. Unfortunately, Dina didn’t realize that these shows are rather short and arrived to an empty house. Hehe. Nonetheless, we had a chance to chat and I was thrilled that she came. Having good friends at my misedashi, and recieving messages of congratulations from friends who couldn’t attend made this a touching event. I never had a rez day and in some ways, this helped complete that cycle for me.

I stayed up way too late on Saturday night and sort of eased into SL on Sunday. I was able to catchup with Leanna a little bit, plus got a lovely misedashi gift from my former onesan, Miyuki-san. Later, I went to the garden and was joined by Onesan and Okasan. Okasan removed the tree screen separating my garden from the LY Zen Temple. It was fun hanging out, gardening with Okasan; she is a very intelligent and knowledgeable woman. Later we moved to Onesan’s plot and made an entrance from her proposed garden into the LY.

Around dinner time, I left SL with the plan of returning and working with Onesan on her garden, but after dinner I took a nap which left me feeling deliciously lazy. I ended up watching some old Japanese movies (you know, the kind from the 1950s) I’d recorded earlier. You might think that I’m really getting into this Japanese culture thing, but the truth is I’ve always been into it.