Once again, I’ve been a negligent blogger. So, let me do a little bit of catching up.

First, during the weekend, I learned that a good friend of mine is getting married in SL. Her name is Tulip but that’s not her real name. Oh my, this is getting complicated.

Also, I’ve been able to create some time to get back into the bluesy scene again. In the past week I’ve limo’ed into Not Too Hot, Junkyard and the Distillery. It’s been good to see some of the old bluesy crowd.

Now that I’m maiko, I’m allowed to advertise myself and my services. The services I offer are performed at Little Yoshiwara only, non-sexual, and include dancing, playing musical instruments, telling stories, reciting poems, performing the Tea Ceremony and, of course, intelligent and occasionally witty conversation. 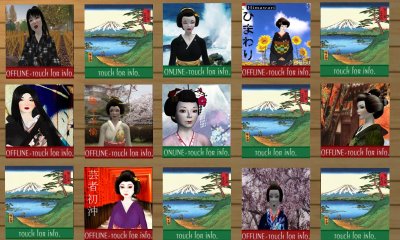 I put my billboard poster up in the ochaya last night. That’s me right in the center. 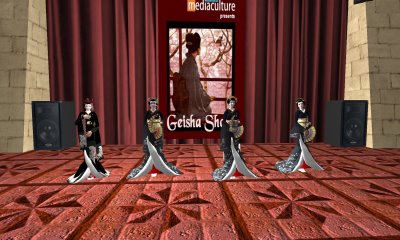 I’ve been in several shows during the past week, including Asagao Treasures, Yoshiwara Ochaya and Aida Lounge (below). (Photo from Yoneyu-san’s Geisha World blog).

Oh yeah, and I’ve been feeling better since I changed my investing and trading strategy. I’m starting to feel a lot better, but the stress of the past six months has taken a toll on me.