We are approaching the end of an extraordinary year, and it’s time to start thinking about lessons learned.

When I began this exersize in journal writing, I was inspired by Mill Pond creator, Micala Lumier’s daily photo project. I liked Micala’s daily discipline, and my idea was to write a journal entry regardless of how I feel or how mundane the subject matter might be, every day. Those of you who follow my journal, know that I’ve not been able to keep up that daily pace, but I think it’s ok. In fact, I think if I had recorded more of the bland and mundane, the blog would be inferior to what it is. I’d like to believe that I have recorded most of the significant events in my avatarian life, and for that reason I want to chalk up my journaling activity as a moderate success.

Then there’s the issue of blending real life issues into the avatarian world of Yordie Sands. In hindsight, I see all of the entries that brought my real life into this blog to be a kind of contamination. I’ve considered going back and deleting the entries, but the “journalist” in me feels that they can as reminders not to make those mistakes again. Clearly, some real life information is unavoidable, but I’m most concerned about my rants about politics and the economy. On the other hand, I think my comments about my health have been useful to me as a statement of the stresses that have torn me apart this year. Nonetheless, because I’ve contaminated this blog with real life non-sense, I’m going to give myself a failure on this. 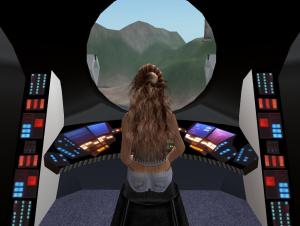 Oh, yes, then there are “My Expeditions”. I went on over ten formal expeditions into the mainland of Second Life, specifically the Sansara continent. I made many notes, shot hundreds of photos and explored over 100 sims during those expeditions. In fact, I wrote over ten journal entries about those journeys, so, the question is, why did I stop? Answer: I found so much of the “same ole, same ole” and endless “whimsy” and “capriciousness” to the extent that it became hard to keep looking for those gems that are still out there. I learned a lot from the expeditions, but I’ll need a new approach before I begin another formal project. Considering that my goal was to explore every sim on every mainland continent, I have to rate this as a moderate failure. (That’s me in a space pod on Expedition 8.) 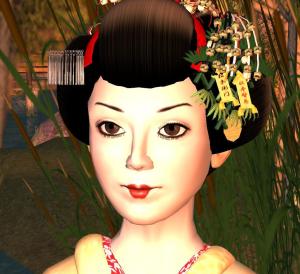 The big news of this year has been my discovery of the world of the SL geisha, and my quest to become geisha. This new adventure has brought a sense of joy to my SL that is a refreshing change from my days of running around from club to club, misbehaving and peenching guys on their fannies. Hehe. Role play is an entirely new experience for me and I had no idea how fulfilling it could be. I believe my quest to become geisha has added a unique scenario for recent journal entries, and I hope to continue this theme going forward.

Then there is the element of the people/avatars I write about, especially my freinds. I write about my friends a lot but I always try to capture the essence of situations without exposing confidences. This is hard to do, but I think I’ve been doing a much better job of this than in the past. Regardless of the situation, I want my friends to be confident that I’d never divulge things they’ve told me in confidence, and I hope that even with people who I may have disagreements, this blog will never be used to embarras anyone. Unfortunately, I’ve failed at this a couple times but I believe that I’ve delt with some very delicate situations with … well, class… and I’m going to give myself a moderate success here too. (That’s LeLe and me talking and talking and talking.) 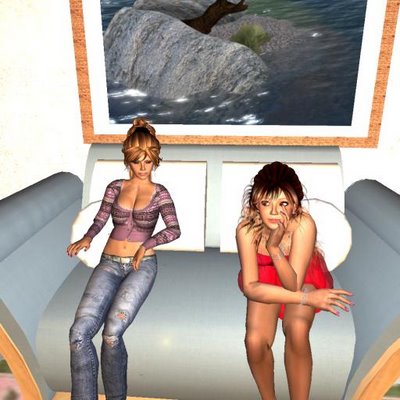 One last thing: I discovered during “My Blue Period” that the blog entries I was writing were becoming a dumping ground for all kinds of emotional baggage. In fact, after reading those entries I realized that I was dripping in emotional syrup. The feelings were real and I was having a crisis, but I was offering up my personal vulnerabilities to an anonymous, probably uncaring world. I know that kind of thing can be entertaining…hehe…and I enjoy reading those blogs sometimes, but I realized I am not comfortable revealing that part of myself. So, I’ve been wordsmithing blog entries to record important events, but without wallowing in my feelings.

It’s funny, when I sat down to write today’s blog I didn’t realize that it would take me where it has, but I’m glad I explored these issues. And I continue to find writing about my experiences in Second Life to be self-fulfilling, especially when I get postive feedback from readers who talk to me in-world. Hugzzz.

I'm an avatar from Second Life and gamer on Xbox. I'm also the author of The Temporal Expeditions sci-fi novel series.
View all posts by Yordie →
This entry was posted in Blogging, Exploring. Bookmark the permalink.