Saturday and Sunday were fun, but I ran out of steam both days. On Saturday, Froggie and I went to Aynnie & Hart’s Christmas Party and skated until Froggie went to work. Then I went into the Ice Palace where the party was in full swing with Fiery Otarred spinning tunes. I saw some friends I hadn’t seen for awhile including Gal & Lou, Blissie, Aeryn, Kimala and plenty of others. It was good to see JT arrive and dance with Fiery. Below is a photo taken with my now unreliable camera (thanks, Linden Lab for you latest release of the viewer). 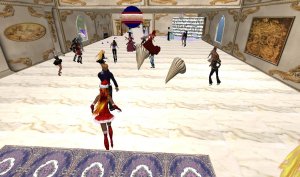 After the party I had to bail and returned later in the afternoon, hoping to see Froggie but he must have gone into raido silence with a bad Internet connection. I was pretty tired from trying to reclaim my RL house from winter storm, so I headed to bed early and watched my fav Kevin Costner movie — Yeah — “Dances With Wolves”. It was a long movie, but I still needed more Kevin, so I watched, “Message in a Bottle”. It was perfect and I cried myself to sleep as Kevin died at sea. (OMG, I love that man!) Nothing better than a good cry to get to sleep.

On Sunday, I had some last minute Christmas stuff to deal with but eventually made it back to SL. Leanna and I had some Christmas gifts we wanted to buy for each other. You know what I mean: thanks SL Merchants for making gift giving such a pain by making merchandise “not transferrable”. What is wrong with these people? It’s Christmas and so often gifts you want to give friends requires that you take them shopping and give them the money to buy the gift you want them to have. That’s is so absurd. Ok, sorry, [end of rant].

After buying each other some gifts, we decided to head back to my place, hang out and talk. Oh my! We had major things to catch up on. We sat on the patio for a couple hours just chatting. I think LeLe is interested in voice chat, but she is soooo shy. OTOH, LeLe is a very brave girl in ways that I’m not. That’s a picture of us, me in my new outfit. Hey! We know! We are hawt chicks. /me smiles

After LeLe left, I even had a chance to catch-up with Matt Deerhunter, but again, I was running out of steam and headed to bed early.

This morning, Suzuki got an IM from Okaasan advising her that she has a new imouto, Cherry-chan. I made the jump into Suzuki World to arrange an appointment to interview her. I’m hopeful that Cherry-chan will have an appreciation of the work required to make her way through the ranks to geisha. I think many of the new minarai think it is all just fun and games. I love the fun part too, but it does require commitment. Later, I chatted with my onesan for a few mintues, and both of us pretty much agree that it will be difficult to really have normal activities until after New Years.

Note to Friends: I’m leaving SL on Wednesday and won’t be back until Friday.