Not Too Hot – Great

WT Beck introduced me to Nottoo Wise almost a year ago, and I’ve always liked her even though I don’t see her as much as I have in the past. Nottoo is creative woman and owns the Not Too Hot Blues Club and other ventures on her sim, but she is also willing to explore new ideas and present them for the entertainment and even education of her many friends.

Today, she sponsored a geisha show at the Not Too Hot Exhibition Center. It featured the Yoshiwara Okiya’s geisha. There was a very good sized audience and I’m certain that most of them did not know much, if anything about the willowy world of geisha. Fortunately, Yoneyu san’s performance was an introduction to the way of the geisha. I snapped the following photo during the performance. 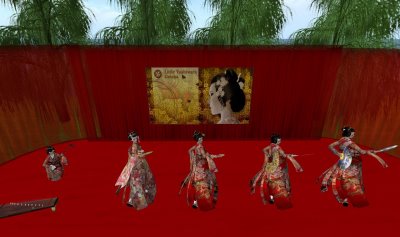 In addition to Yoneyu, other former sisters included Miyofuko, Kamini and Amber were there. Hiroko directed the show and it was one of her better efforts. However, it would have been wise to advise the audience that they should turn off the music stream and listen to the sounds instead.

I'm an avatar from Second Life, a gamer on Xbox, and the author of The Temporal Expeditions sci-fi novel series.
View all posts by Yordie →
This entry was posted in Blogging. Bookmark the permalink.