It was great! Froggie’s Rez Day Party was great! And he was really touched. I was so worried that he might not like it, but he was genuinely touched. The Junkyard was hopping with Luci spinning tunes and when Frog arrived she introduce that “the man from Liverpool” was having his rez day party, and then played a couple of hot Zydeco tunes. Many of the peeps were wearing the cute bluesy froggies on their shoulders, except Kia who wore hers on her head. Yay Kia!! It was a cool crowd with LeLe & Mentone, Dina & Kiff, Magi, Strat, Ziffy, Clover & Madsen (who was a bit off the charts, hehe), Mat, Jen, too many to name them all. Special thanks to Dina, Andrea, Luci and the Dreamgirl group. (Sorry to say my photos weren’t good, my hair kept blocking out Froggie’s face.) 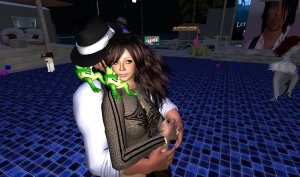