Thursday night started out slow. My sleep schedule is all messed up and I was really dragging. Fortunately, Magi tp’d Leanna and I over to where she was shopping. We hung out and I got a new evening dress. Leanna got one, not sure how many Magi got because she was there when we arrived. Later in the evening, we went over to Shorty’s to catch Johnny99’s act. It was great guitar, but by the time the show ended my nerves were jumping out of my skin and guitar was still reverberating in my brain. I shot some photos. 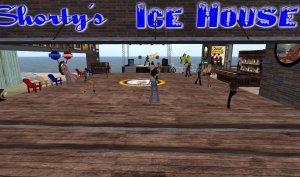 Hanging at Shorty’s for Johnny99’s show. 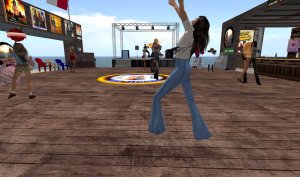 Later still, I was feeling like dancing and went to the Junkyard to see HooDoo Harry’s set. It was a great crowd and I was getting into a frisky mood and danced and carried on. I was having a grand ole time and went over to pestered a guy I know who was sitting quietly, watching the show. Anyway, I seemed to create a buzz because I was such a shameless brat, but it was just playful, we had some laughs and that was it. Harry is one of my fav DJ’s and Avhi is a great hostess, I need to catch their shows more often. HooDoo! HooDoo!