It was the Junkyard, and it was a Dreamgirl pajama party, a slumber party and a sleepover. It started out with a bunch of us girls hanging around the Motel parking lot, then we started throwing down rugs and pillows, all the while talking and talking. We switched to voice early on, enabling us to talk even more.

Then it came time to start the first movie, Crash, but we couldn’t get it working, so we kept talking on right there in the parking lot. And the more we talked the less important the motel rooms seemed, even though we had free run of the place.

Dreamgirls have a lot to talk about, but like all good conversation, it’s not really important what it’s about! There was talk about some of the boys aorund the JY though.

We played SL Twister. That’s me in the pink jammies.

Magi and Leanna are both Dreamgirls, and they arrived in the early afternoon and it was so great to see them! So, we continued chatting and carrying on, and after hanging for awhile we heard that Miss Luci had declared pajama night at her set, so we headed over and invaded the Junkyard en masse.

The crowd exceeded 60 most of the night.

As the night rolled on, Miss Luci got the guys to take off their shirts! Oh yeah! And there was Kiff. OMG! Dina chain up you man! 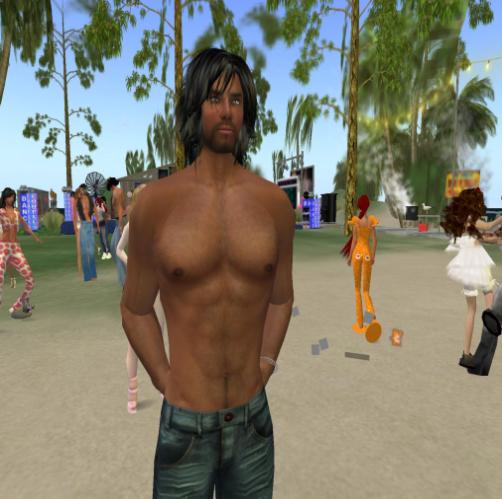 Yes, Kiff, there was talk about you at the sleepover. And in the morning, your physique came up again. (Photo by Azure Wycliffe)

Junkyard regulars on Saturday night love Clairede Dirval’s concerts. And she didn’t let us down, the crowd on JY and JYS sims reached 75 by my count.

Dina looking over the pack of frisky females, trying on the new Dreamgirl swimsuit. Notice our new “Dreamgirl” tramp stamp on her back.

Throughout the evening we dove into Clover’s dumpster. And took copies of so many wonderful gifts setout by the girls. But as the evening rolled on it was time to get spooky and scarey.

Andrea had suggested that Thunder would be a great person to read scary stories to us, and he prepared a story stream so we could play it when we were ready. It was just perfect, especially his rendition of “The Hariy Toe”. Hehe.

We continued chatting of couse, and were becoming frustrated by the growing sense that none of the boys had tried to raid the party. They didn’t even steal the panty box that was in plain sight.

Seep and I concluded that these “boys” were a bunch of old men who had forgotten how to have fun. Some of the girls even went to the Junkyard to invite a few guys over, but even that didn’t work. Well, Tobasco and Rohan did slip in and managed their way into a couple of the girls sleeping bags. hehe. But the rest of us started wishing some of those “old men” would just drop by.

It was really late now, after midnight, and in lieu of any available men we decided to watch Dances With Wolves and go to bed with Kevin Costner on our screens. Oh my! That man. If you’ve read my blog you already know how I feel about him and let me tell you, I’m not the only one. 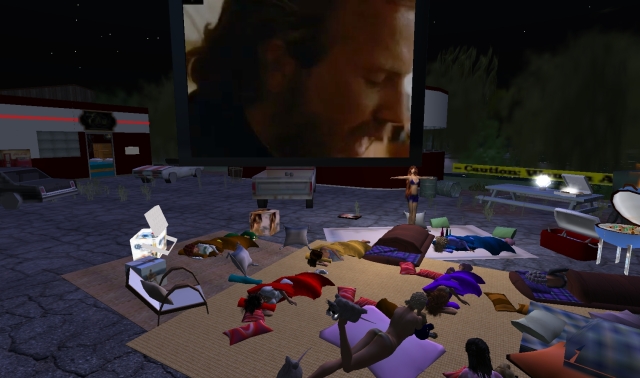 We had become so dug-in at the motel parking lot that no one wanted to cross the bayou to the drive-in, so Dina setup a drive-in screen on the back of a pickup, and we had our Kevin Costner.

Some of us were very late risers, but one of us had a rose by her pillow. It was Dina, rollers and all!

This was the first Dreamgirl special event I had participated in, and I was so happy I got to know so many of these women. Behind each Dreamgirl (and her man), there is a beautiful story, sometimes of a story of challange and courage. I learned that the Dreamgirls are about friendship as much as anything, and that says it all. Thank you Dina and the organizers, Andrea and Gala. And thank you Kiff for being the man who makes things go right.

I'm an avatar from Second Life, a gamer on Xbox, and the author of The Temporal Expeditions sci-fi novel series.
View all posts by Yordie →
This entry was posted in Events and tagged Community, Parties. Bookmark the permalink.

1 Response to The Dreamgirl Pajama Party