Lately I’ve been watching a lot of movies after I log out of my second life. So, on Sunday morning, I woke up late and bleary eyed in the real world. On Saturday night I had made plans to go out with WT on his rez day. WT didn’t have a rez day last year and I offered to setup a little party for him, but he’s a shy guy and decided he didn’t realy want one. So, we decided we’d just go go dancing.

While I was waiting for WT, I decided to take down one of the houses I have on my properties; it gave me an additional 150 prims to work with. I went to the empty plot on the south side of the sim and began working on plans I’ve been considering for a tea house. More on this in the coming days.

WT arrived around 6pm and we chatted about where to go dancing. We considered getting dressed up and going to some of the formal clubs, but in the end, neither of us wanted to change out of our jeans. And we decided to head over to the Junkyard. 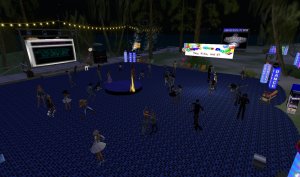 Fiery was spinning out tunes and it was a really great crowd.

I asked Fiery to give a shoutout to WT about his rez day. And then we learned that two other guys had their rez days also. hehe. I think that made WT feel a lot better — safety in numbers and all. I tried to get some good photos but I was experiencing a very slow rez all night. So, WT ended up wearing a gray shirt throughout the evening.

That’s WT & me in the lower right.