My interest in Second Life waxes and wanes for no apparent reason at times. And after taking time away from Second Life, I have found that it’s difficult to get back into the swing of things. In fact, lately I’ve been leaving SL early in the evenings to watch reruns of television show, Lost. Still SL beats television and the local nightlife or lack there of, so for better or worse I always make my way back here.

I’ve been sticking close to home when I’ve been online in the past few days. Mostly, I hang out at my garden. I’ve made some improvements, improvements that probably no one will notice but me. Nonetheless, I am happy with the work. I updated my tour guide, enhanced the bamboo forest, hid some poems for observant visitors to discover, and made some prim saving adjustments. Also, I took this fabulous photo from inside the tea house.

I just love the view looking out from the tea house.

I’ve advertised the garden in Parks & Nature classifieds and have gotten a surprising number of new visitors at the garden. It’s been nice chatting with some of the peeps, but mostly I have been hanging out in the retreat area west of the forest. LeLe and I have spent some time hanging out in the garden too. And some old friends, like Ziffy and Froggie have dropped by, but I’m sorry to say that other friends seem to have disappeared from SL. 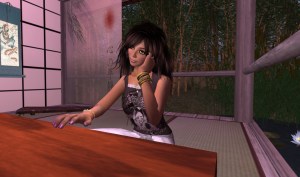 This is me just waiting for something to happen… hehe.

Since Jon and I have broken up, I’ve been enduring some blue spells. It’s really silly that I get so involved. I mean, I’m just an avatar, right? Anyway, I’ve been wondering what is wrong with me that I’m so addicted to this second life. Perhaps I suffer from a personality disorder? Ah, but which one? More on this in the future!

I'm an avatar from Second Life and Xbox gamer. I wrote the sci-fi novel The Temporal Expeditions, and am working on book 2 of trilogy.
View all posts by Yordie →
This entry was posted in Journal and tagged Perspectives, Second Life. Bookmark the permalink.