Wow. Late Saturday night, I was exploring and made a trip back to one of the spots that first turned me on to Second Life, that was the Zen Gardens of Achemon. When I first discovered these gardens, I was in awe and I hoped that someday I’d find a place a nearby plot to buy and be part of the fabulous region they had created.

I haven’t been back to Achemon in quite some time. The last time I was there the view had been contaminated by awful ad farms that stretched into the sky and destroyed the views (thankfully, the Lindens have outlawed this practice). So, I was relieved to see that the ad farms had gone, and I was happy that for the most part the gardens were unchanged. 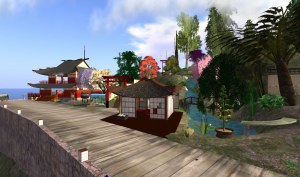 This is a photo I took on Saturday night.

I enjoyed myself at Achemon even tho many of the nearby plots had changed dramatically. The one I miss the most was the fabulous Tranquility Garden. It was just gone. And as I explored, I became aware of how time had not aged the Zen Gardens well. I don’t mean to hit this too hard, but there had been no improvements that I noticed in the more than two years since I first discovered it. This is too bad, because new techniques and textures could bring the garden forward as SL technologies evolve. Regardless, I still felt a strong bond to the Zen Gardens of Achemon and it was one of my regular haunts during the first months of my Second Life.

Before I left, I went to one of the donation jars and made a small contribution, but I also saw a notice about the garden. Sadly, the global economic conditions have hit some of the owners of the garden. Several members who had provided support are no longer able to provide support, and to make a long story short, the gardeners are asking for friends to step up and help. If you can help, please contact Marie Vaughan, Zen Gardener for more details.