Before my latest failed love affair, I started a thread about romance. The funny thing is, that was June, only three months ago, and in between I’ve lived through an entire romance life-cycle.

Anyway, when I started that thread I had given up on Second Life love because I just couldn’t understand SL guys. My romance tread continued with Attraction in Second Life, What Binds Us Together? and ending with Reflecting on a Whirlwind Romance where I postponed the final part of the series, tenatatively titled, “what tears us apart”. And the sad thing is, I’m back to where I started in June.

I’m almost ready to write that promised journal entry, but I’m still stuck at the stage where I’m shaking my head, rolling my eyes and saying, “oh my, oh my”. I’m still mulling what other bloggers have said about SLove, like Joonie Jatho’s great post Why I hate SLove. And I’m embarrassed because I know a lot of people who’ve been successful in holding their relationships together for relatively long periods.

“When someone speaks to you face-to-face, what percentage of the meaning is actually in the words, as opposed to the body language and tone of voice? Take a guess. —-> It’s 7 percent. The other 93 percent is nonverbal…”

I have known about this non-verbal communications issue for a long time but never realized how lopsided it is in favor of non-verbal factors. And in the past, I’ve written about how a single word can destroy a relationship in Second Life. So, I’m thinking about all these things as I consider writing about why SL relationships end. Nonetheless, I need to write about this because I need to work this out in my own mind.

There are many things that bring me to Second Life: music, dancing, building, exploring, friendships, fundraising and the possibility of falling in love. Afterall, there’s nothing better than being Somebody’s Baby. All of those things are enjoyable, but when a love relationships ends, the pain is of that kind of loss can make all of the other activities meaningless. This is what I need to write about. 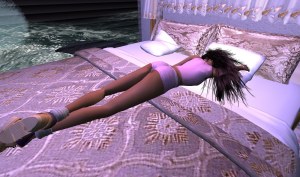