I like parties. Last week, Aynnie & Hart really kicked off the Halloween party season and I’ve been partying ever since. Last night was my sixth party and it isn’t even Halloween yet. Woooohoooo!! Here are some of the highlights of the week.

On Monday night, it was Dryguy & Cascade’s Anniversary/ Halloween party at the Still. One of the thing that makes a great party is having great people, and so many of the right people made it including Luci & Strat, of course, DJ Ali & Darrko, Ellia & Derwin and so many others (sorry the many names I’ve left off). 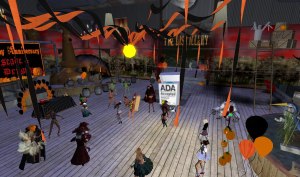 Wow! The Distillery is always a great place for a party, but Luci & company did an incredible job preparing for Halloween. 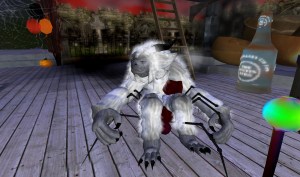 That’s Derwin, sitting on a spider while waiting for Ellia. 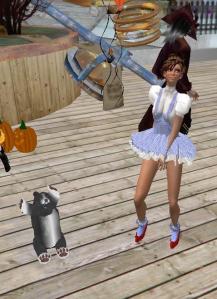 Here’s Toto (Thor) and Dorothy (me… giggles) dancing and carrying on. There are a couple of X-rated shots where Thor jumped up under my skirts, but this is a PG blog. hehehe 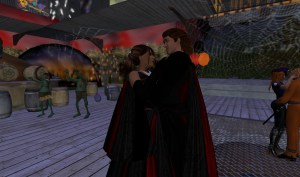 I don’t know Cas and Dry all that well, but was thrilled to be invited to their party. Here’s a photo of the two celebrating one year together. I love people who love each other.

Next, on Wednesday, I went to a party thrown by SL Bloggers Jerremy Darwin and Tymmerie Thorne. Wow again, it was a very elaborate party with a great deal of thought put into it, including an army of insane noob clones. 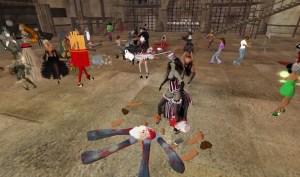 That’s an undead me standing on the remains of a couple of zombie noobs I had killed in one of many noob attacks. 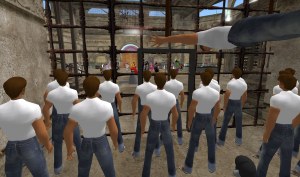 Throughout the night insane noobs were released on the party goers.

Last night was Ellia’s Halloween party and I always enjoy Ellia’s parties. The theme was skeery and she even had a haunted house and grave yard. Again, so many of the right people were there including DJ Iron, Magi, Dillon, Leanna, Darrin, Luci, Strat, Piper was there as a frog, and many others and many great costumes. I’m sorry to say I didn’t get many photos because of some unhappy events there were unfolding in my IM channels, but Ellia is a wonderful host and you an always feel the love at her parties. 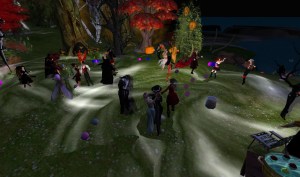 There was fog covering the ground of the skeery park, and if you look to the left you’ll see Piper in his frog costume. 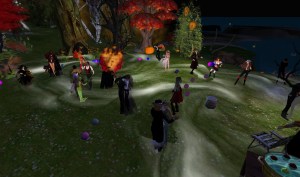 I wish I’d gotten a good picture, but see that pretty little pink genie, toward the back, center… that’s Ellia. She was such a cutie. 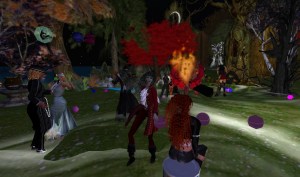 Again, sorry for the poor picture quality, but I was distracted. Anyway, that’s me (you guessed it), undead, and hurling fowl language like a pirate captain should.

There was one more party to attend last night, thrown by a new friend. Unfortunately, shortly after I arrived some witch-bitch named Calamity shot and killed me. I’m sure she was amused, but I was not, so I left. I like to mingle with new people, but when you are new in a group and someone makes you the butt of their jokes, it kills any sense I have of wanting to belong. pffft

Second Life is the perfect place to make Halloween fantasies come true, and this has been my best Halloween so far. I can’t wait to see what is in store at The Junkyard tomorrow night!