It’s been over a week since I officially severed comm-lines and went dark. And even tho I got my new computer with quad this and giga that, I haven’t been in-world very much.

The increased power of the new machine coupled with the power of its’ nVidia Geforce GTS 240 (a souped up 9800 gt) has created a new experience for me. In fact, as soon as I got the new PC setup, I was inspired to explore Second Life by myself for the next couple days.

I just wandered the roads on my home continent (Satori) and made a trip back to the first continent (Sansara), the site of so many of my expeditions in the past. I found the exploring to be relaxing and fascinating. Sometimes I walked, sometimes I rode my horse, sometimes I drove cars or helicopters or hovercraft, but mostly I kept moving to see what was around the next bend in the road or over the next hill. 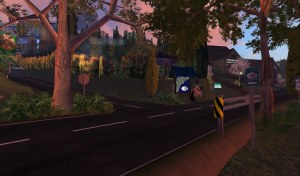 Naturally, I had to ride my adventure companion, Vixen the Wonderhorse. 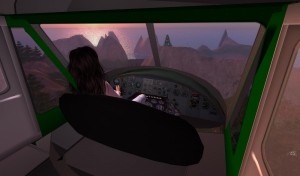 One day I headed back to the first continent, Sansara, and found an airfield. They had trial airplanes and helicopters, so I had to take the new vid card for a ride in a helo. 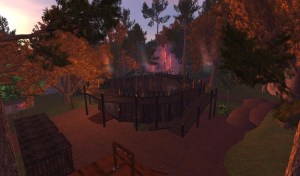 And I came upon this really beautifully designed sim, a home of vampires and other dark things (more on this in the coming days).

On Sunday night, I broke radio silence and quite a few friends said hello (hugzzz). It was good to be chatting with people I care about and I tried to be upbeat, but the truth is I was still struggling to find a reason to be in this artificial world. And another thing, I’m finding so many of my friends are enduring their own SL existential issues. One of my friends said, “It’s like an epidemic”. 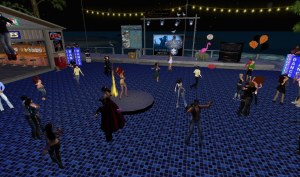 On Sunday evening, I went dancing at the Junkyard as Fiery’s spun an easy-bluey set.

Ok, then yesterday I left SL completely. I headed into the World of Warcraft for the frist time. I know, I know. What was I doing there? I don’t know. But for four hours I, Mage Yordie, ran around in some kingdom killing wolves and creepy little evil things, collecting junk off their dead bodies, and being sent on missions that got me into all kinds of trouble.

It was a strange world for me because the graphics and controls were different than SL, but I was doing ok until I wandered into the wrong area where advanced players started killing me and re-killing me. I figured out how to spoil their fun, but it left me with an overall sense of futility. I’m just not into shoot’em-up, although I used to enjoy adventure games like Might & Magic.

Even with all the luxurious power and gracefulness of my new machine I can no longer get that sense of possibilities for the future. Otoh, yesterday’s WoW experience did cause me realize that WoW is not an alternative to SL for me. I suppose this makes me sound like a bit of a stick in the mud, but I find racing into the forest and killing ghouls to be silly.

I’m simply lost right now. I’m licking my wounds, trying to get past the latest stream of disappointments. There are many things to enjoy in Second Life, but there are also many anti-social people here too.

I’ve had a revelation: I think my problem is, I plunge into my relationships with enthusiasm and openness, throwing caution to the wind. I’ve always been this way and I believe it is part of who I am. I also think this is a quality that people like about me in both worlds. However, here in SL I don’t have the protection of my real life sensibilities, especially feedback from non-verbal communications. In real life I heed my instincts and believe they’ve served me well. Unfortunately, many of the senses that feed those instincts are non-existent in SL.

I'm an avatar from Second Life and gamer on Xbox. I'm also the author of The Temporal Expeditions sci-fi novel series.
View all posts by Yordie →
This entry was posted in Exploring. Bookmark the permalink.
%d bloggers like this: