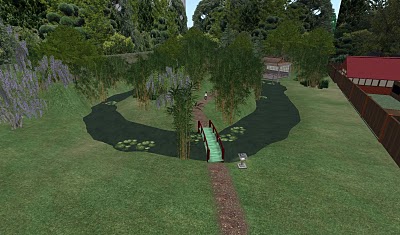 It’s been many months since I completed work on the original Yordie’s Zen Garden in Chodron. One of my former bosses and mentors had a saying he passed on to me, “When the work is going well, you’re not there”. The idea is that when you are really doing, you become the work itself. I’m sure almost everyone can identify with this idea in one way or another. Working is part of our identity and being able to do the kind of work you enjoy is really a gift. It’s that way with me and my SL garden, my Zen garden. I love the work and time passes as if I’m not even there.

At this stage, I’ve completed two key steps in creating my new garden. I’ve installed screens and other features to hide most of the incomplitiblies and ugliness of adjacent plots, and I’ve been coordinating with okaasan Xuemei Yiyuan to created an interface with her lovely Little Yoshiwara sim to the west. Also, I have terraformed the garden into it’s permanent layout, especially my hallmark, The Meandering Pond.

I’m making good progress on the features of the garden. I’ve completed redesigning the teahouse and pond hut and have them place in their final locations. And yesterday I got serious about landscaping and put up literally hundreds of trees, grasses and plants. However, there are some major obstacles ahead.

Yesterday I left my work with an uneasy feeling that I need to rethink my entire plan for the garden; I mean, the Zen garden portion. The bamboo forest and the southern section of the garden with the pond hut is fine, but the actual Zen garden including the teahouse is a blank at this point. 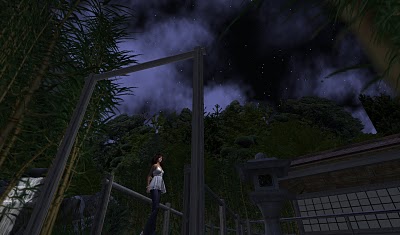 As I completed work yesterday, my mind was heavy with ideas but with no plans for the main part of the garden.

Today’s a new day and there are two weeks to go until the opening. Maybe a vision of the main garden will reveal itself to me. I think I can, I think I can.