On and off, I’ve known Wicke Jonson for quite some time and yesterday he showed me his amazing animals, a dog, a kitty and a monkey. hehe. I was gaga at how cute these furry creatures were, especially his kitty and so he fired up the teleporter, and he and I and his monkey beamed into Zooby’s. I’d never heard of Zooby’s but when I arrived I was totally delighted at all the creatures and critters that were for sale. I could have spent thousands and thousands of lindens, but chose to play it safe and bought a darling tabby cat. Anyway, I brought her home and named her Lilly. I let her lose in the house and she already has a favorite spot on my new chair. 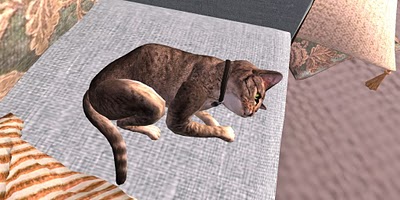 She’s a nice kitty and she doesn’t shred the furniture.

I'm an avatar from Second Life, a gamer on Xbox, and the author of The Temporal Expeditions sci-fi novel series.
View all posts by Yordie →
This entry was posted in Journal and tagged Second Life. Bookmark the permalink.

1 Response to Lilly My New Kitty