I’ve written about Junkyard Blues many times. The JY is sooo much more than just a bluesy nightclub and when you wander around the two main sims it’s easy to loose site of fact that there are 12 surrounding sims.

The JY island sims are where many of JY’s residents call home but the waters are open for sailing. I have sailed the waters from time to time but ran into some rough sim crossing weather along the way. And as evidence of the rough weather, there are several busted up ships run aground out there in those open waters.

I have a friend who lives on one of those islands. I met him at the club a couple years ago. He’s a reclusive man, a wealthy man who walked away from society and chose a secluded life on his island hideaway. He says he lives life as he “damn well pleases” and I believe him. I’ve heard stories about his dark side, but I’ve never seen it. In fact, during the time I’ve known him, he’s been a kind man but an aloof man. His name is ML Ferarris.

A few days ago, I borrowed a skiff and rowed over to ML’s island. ML wasn’t around, so I just wandered around and was a bit startled. I hadn’t been there in quite awhile and saw that he had torn down the home I’d known. He apparently had built a shack on the spot where old cabin had stood. I couldn’t imagine why he had done that, but it was his way. And there were other changes, so I took some photos and I think they’ll tell the story. 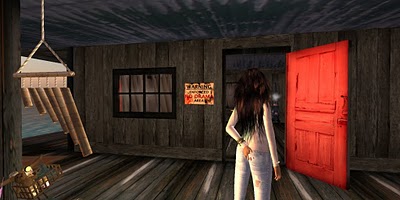 When I arrived, I headed for the house and saw that familiar sign, “No Drama” and I shuddered at the stories of those who had broken his rule. 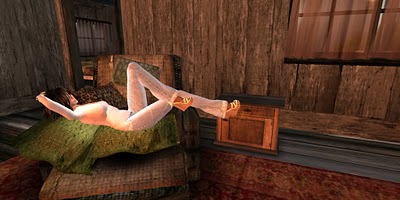 I felt a little like Goldielocks sitting in Papa Bear’s chair while ML was away. 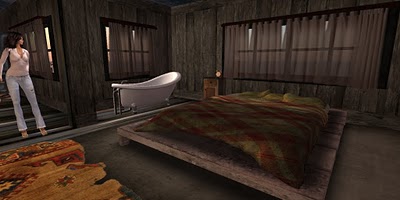 The furnishings in the cabin were stark and I wondered why a man of such wealth would live this way, perhaps he was trying to not standout in this rugged coastal community? 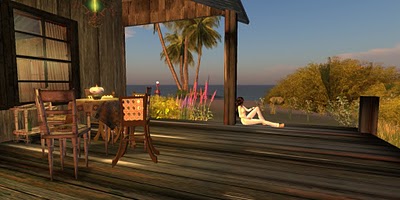 On the back porch, there was a place to relax and enjoy balmy breezes sweeping the windward side of the island. It brought back images of my childhood on the Keys.

After my rest, I strolled up eastern beach and came across a rusty trailer and again the mystery of the reclusive man filled me with more questions. 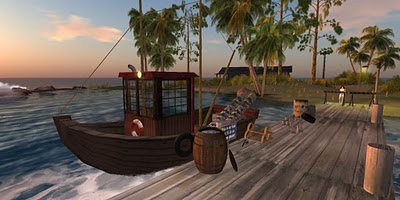 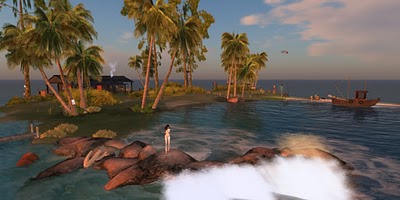 As the sun was going down, I made my way out on the rocks where the ocean creates it’s magic, breaking and misting.

As I rowed back to the Junkyard docks, I made one last stop at the little islet on ML’s sim. I have spent several afternoons on this sandy strand, taking in the summer rays with my pal Leanna. But today I just wanted to look over at the Junkyard, at all the houseboats and trailers. The Junkyard is more than a place of course, it’s the people who bring the JY to life. 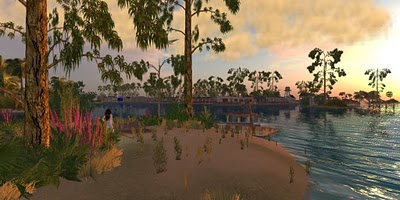 That’s me toward the left looking over at the JY.

One last thing: Special Thanks to ML Ferraris for helping make the Blues for Autism dance auction a success. Not only did he have himself auctioned off, he also made the high bid for TWO of our ladies.

I'm an avatar from Second Life and Xbox gamer. I wrote the sci-fi novel The Temporal Expeditions, and am working on book 2 of trilogy.
View all posts by Yordie →
This entry was posted in Exploring and tagged Exploring, Friendships, Photography, Second Life. Bookmark the permalink.