The last time I saw Wicke Jonson, he was a regular looking guy who had an above average number of in-world doggies and kitties laying around his beach house. Well, yesterday he sent me a “help” IM, and what followed was like an episode of The Twilight Zone. A couple minutes after I got his distress signal, I raced over to his place and found a big black fuzzy kitty on the dock. The kitty was in a stand off with Wicke’s German Shepard.

I didn’t see Wicke standing around, so I told him in IM that I thought the kitty looked like he could handle any trouble with that doggie. Then I looked around for Wicke and finally realized that Wicke had transmigrated his soul into the kitty itself. Lawdy, lawdy. hehe. Somethings can only be explained thru photos. 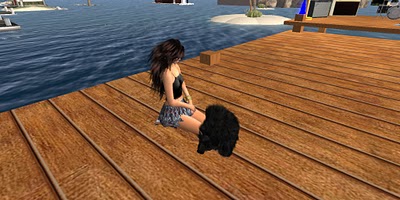 That’s me with Wicke. Yes, he’s that black fuzzy kitty.

If you click on the photo, you’ll see a blowup of the kitty’s face.

Hugzzz Wicke! You find the most amazing animals. And you make a very fine kitty yourself. What were you doing under my skirt tho?

I'm an avatar from Second Life, a gamer on Xbox, and the author of The Temporal Expeditions sci-fi novel series.
View all posts by Yordie →
This entry was posted in Journal and tagged Friendships, Second Life. Bookmark the permalink.