Ok, I know that Caledon is one of SL’s big attractions but I had never been. Most of my exploring has focused on the mainlands, bluesy places, Japanese places and shopping. I’ve read things about Caledon including Zoe Connolly’s blogs. I even enjoy the whole idea of Steampunk and enjoy videos like RIESE, The Series. But I just wasn’t ready to plunge into such an immersive experience as Caledon.

But yesterday, after I returned from my break, I decided it was time to take a look at Caledon and it’s giant sim complex. So, I made my way to Caledon’s Visitor Center and after reading about the community and all it’s rules and traditions I was a bit overwhelmed. But it was just too intriguing, so I began my adventure.

As I began exploring, I found my way to this delightful space ship in Caledon Victoria City. 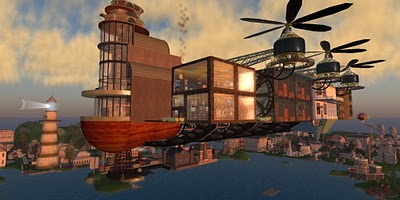 I kept noticing this giant structure on the map and finally made my way to Caledon Steam SkyCity. I was totally blown away by this suspended sky city.

My first visit to Caledon was relatively short, a couple hours, and the complex is so vast it is easy to see how you could spend days just wandering around. I was impressed at the extent of the organization and government and just the sheer number of sims. I was delighted by many of the stuctures and contraptions. Imagination reins supreme at Caledon. It was clear to me that this is a complete community and I’m sure I’ll return to explore.

The one thing I found unexplainable was the shortage of people. With so many sims, maybe a total of twenty sims, there were only 40 people and half of them were on one sim. I would have expected hundreds of people but maybe it was just the time of day I visited. I’m sure there must be many people paying large tiers, but when I visited sim after sim, they were empty.

I'm an avatar from Second Life and gamer on Xbox. I'm also the author of The Temporal Expeditions sci-fi novel series.
View all posts by Yordie →
This entry was posted in Exploring and tagged Adventure, Beautiful Regions, Exploring, Role Play, Second Life. Bookmark the permalink.

2 Responses to Into Caledon