My Morning at Miho Island

I believe I met Hartigan Beck sometime in early 2008. Hart is Ayn Tomsen’s partner-in-crime and the two of them seem to have a lot of fun building things together. They also have a lot of fun when they go out dancing, and if you look carefully you’ll usually see a big beautiful parrot sitting on Hart’s shoulder. In fact, Miho has become a bit of a celebrity as she makes the rounds with Ayn & Hart. And one more thing, apparently, Miho has a lot of sway with Ayn & Hart. So much so that a new sim has been named after the vivacious parrot, Miho Island Retreat.

This morning I went to the grand opening on Miho Island and had a chance to tour the place first. My first observation was that it is a highly terraformed island with great mountains and valleys, even a beach to play. And there were two features I especially enjoyed, the horse stables and Ayn’s coffee house. There were orchards, bird homes (far to elaborate to be called birdhouses), rivers and trails that lead to every corner of the sim. 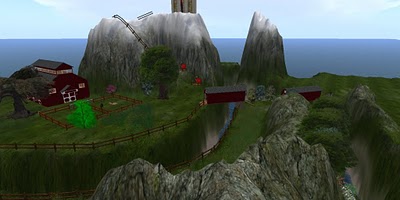 This photo really belies all the charming nooks and crannies to be found all over the island.

This is a photo of the beach with it’s many amusements.

I explored for about 30 minutes, then the party began. BusyBee Beaver was the DJ and she spun tunes from a list provided by Miho herself. Miho’s tastes are a bit difficult to pin down but they ranged from Madonna to Lady GaGa. hehe

Yep, that’s Miho sitting on Hart’s shoulder with Ayn dancing to the right.

Many friends where there including Tippy & Steal and others, and friends I hadn’t see in awhile were there including Darrin & Lacey. Miho has clearly elevated herself to a type of rock star status. She even has an alter at the entrance where you can worship her majesty. hehe

I'm an avatar from Second Life and gamer on Xbox. I'm also the author of The Temporal Expeditions sci-fi novel series.
View all posts by Yordie →
This entry was posted in Journal and tagged Parties, Second Life. Bookmark the permalink.
%d bloggers like this: