I haven’t seen many of Grace McDunnough’s concerts since I left Mill Pond. Grace’s lovely voice and her acoustic guitar seem to blend together, bring their own magic to the great songs she sings. Last night I was glad to see that Grace was performing, so I hopped on a teleporter beam and headed over to the Freudian Slip to get some of her soulful sounds. 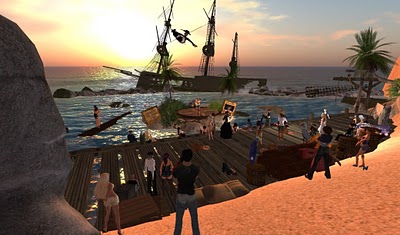 There was a large crowd, over 45 peeps at one point.
I even saw Crap Mariner. 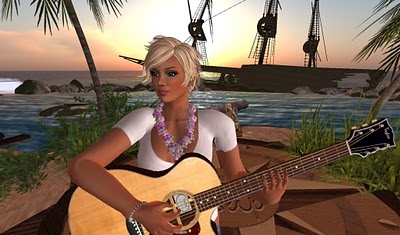 Grace strumming her guitar, singing.
She even got the crowd singing (well, texting) along.

I used to catch Grace’s shows often when I lived at Mill Pond. That was a long time ago, and when Mill Pond was dissolved I lost track of her. It wasn’t until the recent troubles and return of Philip Linden to LL that I rediscovered Grace, mainly thru her outstanding blog, Phasing Grace. It’s good to have Grace back in my second life. Great show, Lady!

I'm an avatar from Second Life, a gamer on Xbox, and the author of The Temporal Expeditions sci-fi novel series.
View all posts by Yordie →
This entry was posted in Blogging and tagged Events, Nightlife, Second Life, Socialite, Talented Artists. Bookmark the permalink.