On Sunday, there was a Summer Festival at Hosoi Ichiba. And when I speak of Hosoi Ichiba, I’m referring to the giant Asian market, but also the four sim group that represents the themes including Japan Kansai (home of the geisha town), Japan Chubu (home of Matsumoto Castle), China Shichuan (home of the Great Wall) and, of course, Japan Kanto (home of the amazing Hosoi Ichiba).

The highlight of the festival was the Summer Festival geisha show, but before the show began I took some time to explore the sims. I put on a comfortable yukata (a light, summery kimono style outfit) and spent a couple hours reacquainting myself with the wonders of the sims. Without question, my favorite spot is the geisha town but recently I’ve become fascinated with the historic Matsumoto Castle. Here’s a photo I took at the bridge leading to the castle.

I’m wearing a freebie yukata from the Gion Project.
Sometimes freebies are exceptional.

The show was set to begin in the early evening, so I headed back to Hosoi Ichiba Marketplace where a stage had been constructed for the event. As the Sun was setting, the show began. 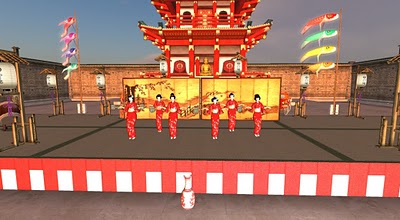 The geisha & maiko dance to festive music accented by heavy drums,
while Josiane Llewellyn began a story about Gion. 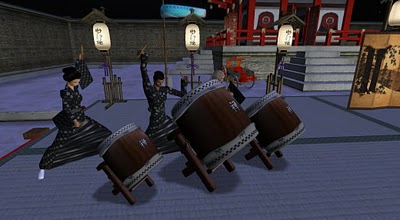 As the drums pounded, geisha Masumi announce that maiko Akiko Omizu
would tell us about “Fireworks!” 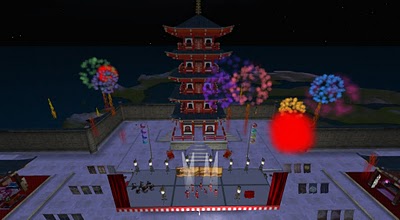 And as the geisha danced the sky above Hosoi Ichiba filled with fireworks! 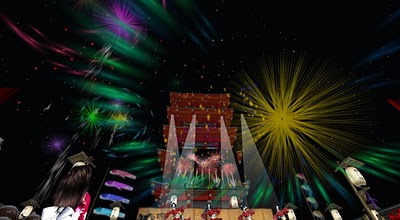 Again, the sky filled with an amazing pyrotechnic display.

This was the best fireworks display I’ve ever seen in Second Life. My former onesan, Masumi said that Akiko (my former imouto) had a lot to do with the fireworks display. Yay Akiko! Unfortunately, as with all fireworks displays they eventually have to end. And as with all shows, they end too. But this was a wonderful experience and really did renew the senses in the midst of the long hot Summer days.

When people I meet learn of my interest in the way of the Geisha, Japanese gardens, Zen, haiku, Japanese cuisine, saki (*smiles*) and just all things Asian, they ask if my human is Japanese or Asian. But she’s not, at least not in this lifetime. However, I have a hunch that she must have been Asian in a past life.

I'm an avatar from Second Life and Xbox gamer. I wrote the sci-fi novel The Temporal Expeditions, and am working on book 2 of trilogy.
View all posts by Yordie →
This entry was posted in Events and tagged Beautiful Regions, Events, Geisha & Samurai, Photography, Role Play, Second Life. Bookmark the permalink.