The Most Wonderful Place

I discovered the PIER nightclub in my second month in Second Life, that was like May 2007. When I discovered PIER, I thought it was the most wonderful place in the world. The dances amazed me and I thought the DJs were amazing. The people were great; in fact, if it hadn’t been for the PIER and all the great people I doubt that I’d have really gotten involved in SL to the extent I did.

Things change very fast in SL. Due to the great increased traffic at the PIER, it was necessary for the owners to build a new bigger version of the club, and running on a class 5 server. And wow, when we got on that fast server, so many of the problems with rezzing and lag disappeared. Here’s one of the few photos I have from those days, it’s the night of the grand opening of the new PIER.

Also with the new club, there were more activities, more diverse people and the types of music expanded into new genres, including Hip Hop. And while I don’t like hip hop, I gave it it’s due back in the early days of Grandmaster Flash. But a lot of hip hop is now what I call filthy-mouth Hip Hop, the kind where one fool tries to show other Hip Hop fools that he’s the most vulgar, filthy mouthed of them all. I like cool, cool is cool but stupid is stupid, and filth-mouth hip hop is stupid.

There were a couple DJs who seemed to think filthy-mouth hip hop was cool, so when they started, I just bailed and apparently I wasn’t the only one. The mood changed at the PIER. And experience was lost as far as I was concerned. Apparently the owner wasn’t happy with the way things were going either and the new club was finally closed.

But Carys Dahlstrom always kept the original PIER. And a few months ago I rediscovered it while looking for land on the Satori continent. There were even a couple of the “old timers” there that night, and Carys herself showed up. Wow! For a few hours I had hoped the PIER could become what it once was, but I didn’t get the feeling that it was going to happen again. To this day the PIER has over 1,000 members in it’s group, but I haven’t gotten a single notice of an event since I rejoined that night. There are private parties and weddings but it’s no longer a public nightspot.

Anyway, the other night I was alone and just wandered over to PIER. I had checked the map before going and no one was there, but I just wanted to go and stir those old feelings again. 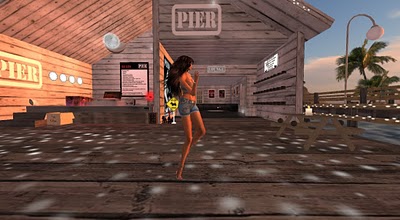 Yeah, that’s me all alone, dancin’ and prancin’ at the PIER.
I swear, even now I get a thrill.

I know I’ve idealized those early experiences. But PIER was this place that made me aware of what SL hospitality should be. The PIER crew enthusiastically welcomed you by name and the hosts tried to help you if you seemed lost. They also threw you overboard, “planked” you if you went “Away”. hehe. If there are any of the original crowd from the PIER out there, hugs and love!

I'm an avatar from Second Life and gamer on Xbox. I'm also the author of The Temporal Expeditions sci-fi novel series.
View all posts by Yordie →
This entry was posted in Exploring and tagged Exploring, Second Life. Bookmark the permalink.
%d bloggers like this: