Ever use a term that you aren’t sure of? I was going to call this post “Catting Around” till I decided to lookup the term. I thought it meant just running around like cats do, hither and yon. Oh no, here’s what the dictionary says:

Catting Around
(v.intr.) Slang
To look for sexual partners; have an affair or affairs:
“catting around with every lady in sight” (Gore Vidal).
(thefreedictionary.com)

Note to self: don’t use the term “catting around” when you really mean, just out running around.

Aside from attending well document parties, I’ve been getting around in the past few weeks. Do you have a pile of landmarks that people have given you or you’ve collected for one reason or another, and you’ve never gotten around to going there? I had a lot and I’ve steadily checked them out in recent weeks.

Btw, here’s a tip: if you don’t know for certain that the place you are teleporting to is still the place it was, open the About window on the LM first, then check the name that appears in the window vs the name on the LM. If they aren’t the same, your place has either moved or is gone. I found that about a third of the hundreds of landmarks in my folder were invalid. For the ones I was sure had just moved, I dropped them in another folder to lookup later. Hey, I was going thru a lot of LMs.

My travels really began in early August when I checked out what Kiff Clutterbuck had done at Junkyard Blues, over at the area near where my boat is docked. If you haven’t checked out this area to the west of the dance club, it’s always worth a look. Kiff and Dina are always making improvements to the Junkyard, which is one of the reason it’s such an enduring club. Anyway, there are some beautiful sights over there.

Yeah, he put a little lighthouse at the end of one of the piers.

I also made my way back to Pandora Moon. I’ve heard that the sim may be sold and Pandora Moon may move and either way, this will be a disruptive situation. So, I went back to take a look and was a bit surprised to see that the place had changed a bit. My understanding is that a hundred people contributed to the building of Pandora moon, and even tho it has changed it is still a great accomplishment. Regardless, if you know anyone who can help the folks there, please don’t hesitate.

This is near the landing area at Pandora Moon.

I checked out many new landmarks and I’ll be writing about some of my discoveries in the future, and I made it to the Maitreya 50% off sale and got some new hair which I’ve highlighted endlessly. I also made it to several clubs during the past week. 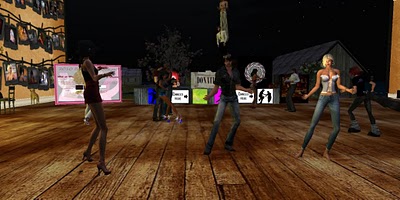 Thor hosting at The Riverside

At Hotlanta, LeLe (left), me (right) and in black stockings, Kitten. Yay girlfriends! 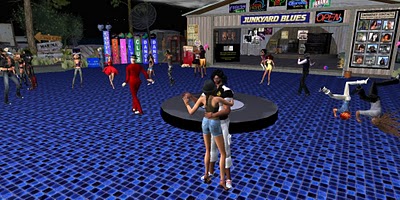 I managed to get on Reno’s dance card at the Junkyard. hugsss Reno.

It’s Saturday morning and between zooming around Second Life, and my human’s banging away on projects in real life, I’m a spent cartridge. I don’t have any invitations to any parties this weekend (tank gahd), but rumor has it that there will be a Bruce Springsteen tribute concert on Sunday. Yay Boss! “Together we were born to run….”

I'm an avatar from Second Life and Xbox gamer. I wrote the sci-fi novel The Temporal Expeditions, and am working on book 2 of trilogy.
View all posts by Yordie →
This entry was posted in Journal and tagged Exploring, Nightlife, Second Life. Bookmark the permalink.