Morning Of The 2nd Day

It’s morning of the second day and as soon as my human awoke, I felt the pull of Calas Galadhon. I wanted to get back into the forest where everything seems at peace. I also wanted to get out on the waters surrounding Calas and sail. So after answering a few IMs, I put on my shorts & top and favorite shoes then teleported in.

I walked at a brisk pace until I got to the beautiful flowers along the path leading to the Victorian homes and the terrace above the overlook. 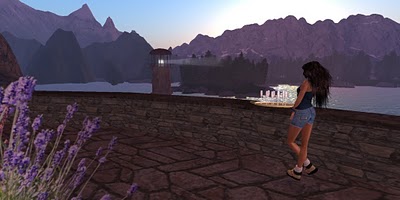 From the terrace I could feel see the Sun’s rays just starting to break in the distance, cutting the morning fog. There was a tray with glasses of champagne, perhaps from a party in the previous evening.

All of a sudden I heard someone say, “hello.”

I was surprised and turned around to find a young man. I didn’t see him when I entered the terrace and I wondered if he materialized from thin air. He had a rather sinister name, but was very pleasant and polite, and I was delighted to talk to him. Then just as I was warming up to him, he said he had to leave. I was disappointed but then he asked if we you meet a little later for a little “date.” Ah! How I love that, a date. So few guys actually say charming things like that in these days where many women are happy just to get a guy’s attention. I smile and gave him an enthusiastic, “sure.” He said it would just be an hour, then in a minute he was gone.

I continued wandering the land and arrived at an inviting dairy farm. I entered the farm and explored the surroundings. 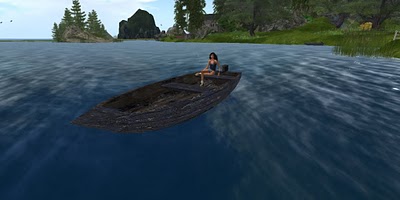 From the farm I made my way to a small dock with an old skiff with a tiny outboard engine. I hopped in, cranked up the engine and headed out into the deep waters.

I piloted my little boat along the shoreline wondering if it was actually sea worthy, but it putted along just fine. I saw many more wonders from the water. I even came upon a pod of Orca, but felt it was best to get past them without them noticing me. The clock was reminding me that my new friend was past the hour he had set for our date. I began to wonder if I’d see him again, and the clock kept ticking but just before I docked I got his IM. We met at the top of the stairs from the landing. While we were deciding where to go, I decided to sync up with my new acquaintance’s style with a little black GothiCatz.

While chatting I told my friend about the cottage I found in the forest on the previous day. And despite the distance and difficulty finding the cottage, he said, “yes, let’s go there.”

We made our way thru the forest and after a few wrong turns and a little backtracking, we arrived at the cottage and made ourselves comfortable.

We talked about a variety of things and had a few chuckles. I learned that he is a “wannabe” musician and a poet. I wondered what he did in Second Life and he began weaving a story for me. He talked about having a family and then he told me a most shocking thing, “I am a vampire.” I didn’t really understand what this meant, but I know what vampires are. He said, “Don’t worry I won’t bite you..” hehe Then, “…unless you want me too.” I thought, what the heck, but he cautioned that I’d lose my immortal soul.

There is more to this story, but I’ll have to finish it on another day. I will add that I did exchange friendship with my new pal, the vampire.

Yes, Calas Galadhon is amazing and did you know that this sim group is almost entirely powered by homestead sims? It’s true. The exceptional builds are implemented with the limitation of 3750 prims per sim, and it all seems to work exquisitely.

I'm an avatar from Second Life and gamer on Xbox. I'm also the author of The Temporal Expeditions sci-fi novel series.
View all posts by Yordie →
This entry was posted in Features and tagged Adventure, Exploring, Photography, Role Play, Romance & Sex, Second Life. Bookmark the permalink.
%d bloggers like this: