The Wonders Of The Tang Dynastay

Last night, I visited the China Tang Empire sim. The sim was opened in May of this year, during a time when my human was preoccupied with things in the real world. It’s also featured in Second Life’s Destination Guide but I missed it there too. It wasn’t until Zoe Connolly gave me the LM the previous night that I was finally pointed in the right direction. I think anyone who reads this blog will want to get pointed to this amazing place too, so here is the landmark.

I arrived in my usual hiking clothes, but from the moment I arrived I was so immersed in the majesty of the build that I changed right there on the spot. I just happened to have a Tang Dynasty empress gown in my exploring backpack and changed discretely. Good thing too, because shortly after I finished changing another explorer arrived, a one Spot Barthelmess who quickly became my pal was we began exploring.

That’s me in my golden gown with my new friend Spot.

At almost each step we took we’d exclaim to each other, “Awesome” or “Amazing” or “Exquisite”. I’m sure we used every superlative in the book, but you will see why when you examine just a few of the photos I snapped. The sim is owned by Valor Renilo and here is what he says in his profile, “Please join me on this journey and travel through the corridors of time.” Also, many of the structures and objects that comprise the build were created by Ryusho Ort, who is a master builder of the highest order. 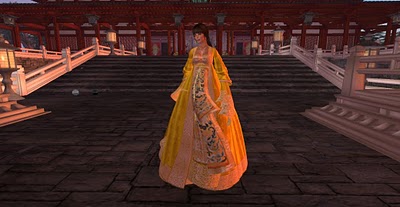 I stood in front of the entrance to a great palace, still a little detached. 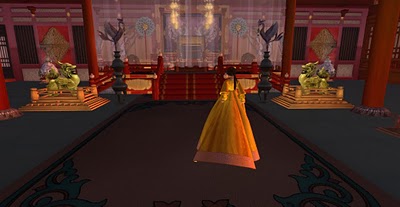 Once inside, standing in front of the emperor’s throne, I was immersed and overwhelmed. My new friend Spot and I began our endless stream of exclamations as we wandered about.

This desk was one of many items that can only be described as “exquisite”.
Please click on this photo to open the full size to see the intricate details.

At this point, I’m going to begin to pullback the reins. I shot many, many photos at this amazing place. Photos that are as beautiful as any I’ve ever captured, but I’ll be doing you a disservice if I reveal all because you must go visit China Tang Dynasty for yourself. Still I’ll give you a couple more just to justify why I’m going to break my rule about qualifying my Wonders of Second Life. You see, this is only a single sim but the beauty is so touching, the theme so compelling and the building must truly have been a labor of love, I have no choice but to include this sim in my list. 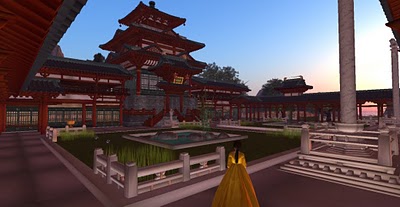 Yes, of course, there are many captivating courtyards and gardens there. 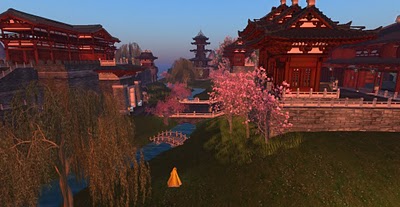 And there is grandeur!

Before I close I want to post a quote from the China Tang Dynasty group: “The Tang Dynasty (June 18, 618–June 4, 907) was an era of unprecedented progress in art and technology – the Golden Age of Chinese culture and economic development. Take a walk through the corridors of time, and immerse yourselves in the divine beauty of Tang on the ground level. The underground offers the doorway for an alternative escape. Join us on this exploration…” Once again, the spirit of sharing. Thank you Valor Renilo.

When I came to Second Life about three and a half years ago, there wasn’t anything like this anywhere. There were many people doing great things, but this build implements all of the most current technologies and showcases the most advanced artistic techniques. I’m not saying that this is more advanced than other places I’ve put on my Wonders list, each is different in it’s theme and scope. What I’m saying is, the bar has been raised since I first arrived and I am glad that during my early days of exploration I was able to get a feel for how where we’ve come from.

Yes, this is a single sim but it is truly a Wonder.

I'm an avatar from Second Life and gamer on Xbox. I'm also the author of The Temporal Expeditions sci-fi novel series.
View all posts by Yordie →
This entry was posted in Exploring and tagged Beautiful Regions, Exploring, Photography, Second Life. Bookmark the permalink.
%d bloggers like this: