It has been over two years since my last expedition to Sansara continent. I never did what I started out to do, basically to explore every sim on that continent. I did work hard tho, I explored over 90 sims before I changed my plan and moved to what I referred to as “scouting missions.” Back then I was searching for something I didn’t really understand yet. I wanted to get a sense of how the lands look and feel. And I did fulfill both of those two goals despite never finishing my overall mission.

This morning, I returned to Sansara because I’d been given an LM by Dex Trenchcoat. The LM was for the Ganymede damn and below to the Ganymede Riverwalk. Dex and I became friends when we discovered we shared an interest in travelling the roads of the mainland continents. Anyway, I changed out of my hosting outfit and headed over there expecting to take a look, get some photos and then return home. 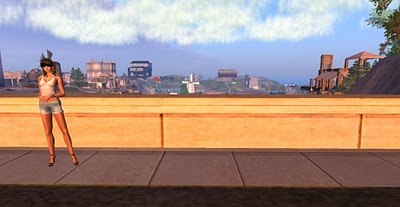 I arrived on the road running along the top of the damn,
and overlooking the vast mainland areas below. 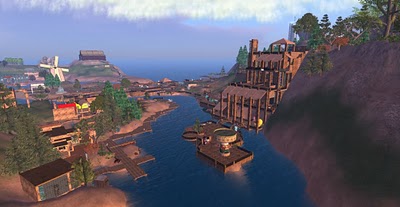 Along the river beneath the damn, there was a vast Ganymede community.
So, I had to travel down there to see more. 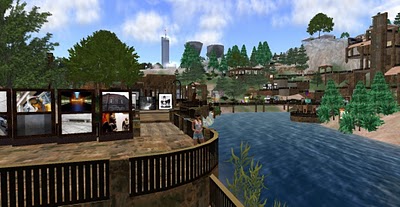 I found a highly evolved riverwalk area with a special emphasis on art exhibits. 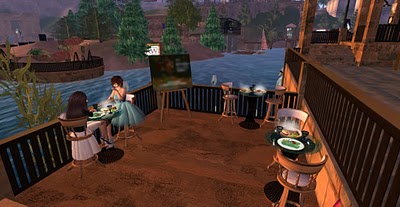 And there were people having brunch in the little cafe.
I thought this is going to be a wonderful place to visit for late night dinner. 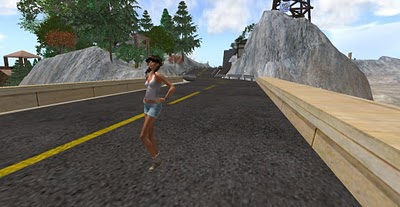 But as is my way, I was drawn back to the open road.
So, I changed into some hiking shoes and picked a direction. 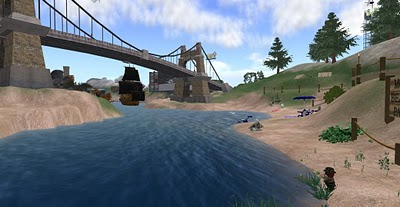 I found many amazing sights along my route and that old wanderlust was stirring in me again. Also tho, I found many signs of why the mainlands are so dreaded by many.

I’ll be writing more posts about the mainlands in the coming days, but one thing is already clear to me, visiting the Sansara continent is like visiting an older neighborhood. The things that were thrilling in the 1960s look a bit odd when compared with things built in the 2010. That time distortion is even greater in Second Life.

As I search for my Wonders of Second Life, I’m realizing my discoveries may need to be put into context with the advancement of technologies and associated artistic expertise. Like, the Eiffel Tower was a wonder in it’s day but compared against some of the modern skyscrapers going up all over the world it is a relic that should be appreciated in the context of it’s time.

I'm an avatar from Second Life and Xbox gamer. I wrote the sci-fi novel The Temporal Expeditions, and am working on book 2 of trilogy.
View all posts by Yordie →
This entry was posted in Exploring and tagged Exploring, Photography, Second Life. Bookmark the permalink.