Last night, Tak and I were hanging out over at The Rose Theater, actually outside in the garden by the sea. My thought processes were totally in Sleep mode but I was having a great time. Apparently Tak’s mind was mulling the many roleplay possibilities we’d talked about over the past week, then toward the end of the evening he announced, I know what we need to do. hehehe 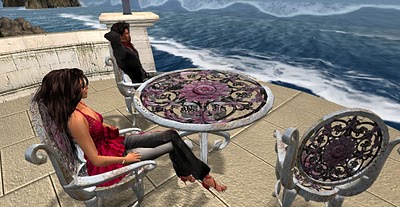 Here we are just taking in the waves.

So, we hopped up and raced across space and time to the Pegases sim where there was an amazing store of things Na’vi and human, plus portals to amazing immersive roleplay environments. We’d been here a few days earlier, but this was the real deal now. We put on our “OOC Non-Combatant” tags then began exploring with greater purpose.

Under the holy trees, Tak explained his idea to me.

Of course, I’m not going to tell you the idea other than to say that my role will be that of a healer and he will be a hunter. Once we had this scenario mapped out a bit, we began racing about the different Na’vi related stores and got a good start on Tak’s character. We also realized, even tho we’d both seen Avatar three times each, we’d need to study the movie for character details. I mean, if I’m gonna be a healer, then I’m gonna need some good chants and potions and spells and things. So, we raced across space and time to LV and Shaft vid rentals and got a copy of the movie to study together.

More on this to come. I’m thinking of writing a mini-story along the line of Zoe and Headborro‘s frameworks. In fact, I continue to study their works.

I'm an avatar in Second Life and Xbox. I'm also the author of The Temporal Expeditions sci-fi novel series.
View all posts by Yordie →
This entry was posted in Journal and tagged Avatar, Identity, Romance & Sex, Second Life. Bookmark the permalink.
%d bloggers like this: