It’s a bit surprising for me to discover how few blog posts I’ve made since Halloween. I must be a bit spent and then there was the planning for the wedding and all that. I think I’m at a place now where I can settle down a bit and do some catching up again. It’s not like I haven’t been keeping track of things. I have shot some pics here and there, but I just haven’t had the presence of mind to make any posts.

Last Sunday Tak & I made the rounds to several clubs. I already wrote about our adventures at Darkside Restart, but later that evening as we were just settling down we headed over to join Magi & Jaco and Breeze at the Crossroads blues club. If you’ve never been, Crossroads is a bluesy biker bar and so Tak & I got decked out in our biker looks. I gotta say I’m still amazed at the things Tak has in his inventory. (no, I don’t mean that… hehe… well, that too…) 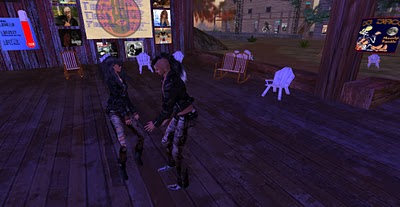 It’s Friday now and despite the fast that it’s been a busy week, we’ve made it to the weekend. I’m planning to meet with Leanna in a few mins and hopefully we can catch up on all the things that have been going on. It looks like Thor & Leanna have been on a roll too, so we have a got to talk about. Yay!

I write my blog for a reason and I’ve discovered that when I go for so long without keeping up with my posts, it becomes more difficult to get rolling again. I’ve seen this in following other blogs, people start blogs and the at the first ripple in their lives they loose track and weeks or months pass with no posts. And it gets harder and harder to restart. I’ve seen some good friends blogs just stop or loose direction altogether.

I'm an avatar from Second Life and Xbox gamer. I wrote the sci-fi novel The Temporal Expeditions, and am working on book 2 of trilogy.
View all posts by Yordie →
This entry was posted in Journal and tagged Romance & Sex, Second Life. Bookmark the permalink.