My human had a pretty demanding week in real life, so when I got control of the keyboard I was ready for some fun. It was Friday night and as always Tak & I got dressed up for a fun evening. I hadn’t worn any of my mini-skirt outfits in what seemed like ages, so I put on one of my favs from Minikri. Tak suited up in one of his cool new suits and we hit the road running. First stop was Ambrosia Dance Club and we were in for a totally cool surprise. 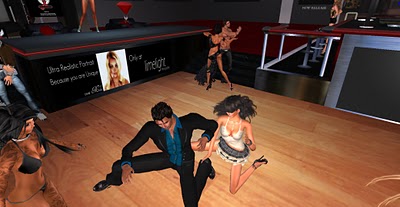 Here’s Tak & me getting down at Ambrosia! It’s a cool club, totally different than my usual haunts.

Shortly after we arrived, Tak notice a familiar name, Javier Dulce. Javier was DJ’ing and Tak explained that Javiar was his first friend in Second Life, and they hadn’t seen each other in ages.

We hung out at Ambrosia until it came time for a surprise party for someone far to wily to be surprised, Thor. It was Thor’s big Third (3.0) Rez Day and the “surprise” party was planned for his favorite nightspot, JudyBLUES. 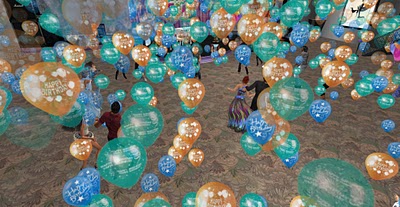 As you’d expect at a party for Thor, there were balloons, steins of beer and… 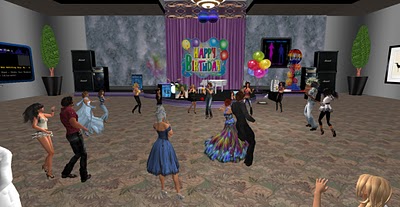 And a room full of people, and music and dancing…
(That’s me & Tak lower left, with Breeze in blue dress left of center)

And there was Leanna and Thor! Notice the stein of beer in Thor’s right hand.

And there were balloons! HAPPY REZ DAY THOR!!

I’ve mentioned this before but it’s worth repeating, I was Thor’s first friend in Second Life. True story. And we are still friends after almost three years, and that’s not the easiest thing in SL to do if you’ve ever tried being one of my friends. /me blushes. It was a great night for old friends and here’s hoping for many more. /me waves to long lost old friends

I'm a blogger and photographer on WordPress. I'm also author of the sci-fi novel The Temporal Expeditions, and am working on book 2 of a planned trilogy.
View all posts by Yordie →
This entry was posted in Journal and tagged Friendships, Parties, Photography, Second Life. Bookmark the permalink.