By now, my friends know where to find me on Saturday evening, dancin’ & prancin’ at Junkyard Blues. I’ve been going there to enjoy The Miss Luci Show almost every Saturday night for over two years (hot 2). And exactly one year ago (big 1), I began hosting for DJ Luci Bergbahn. I never planned to go to the Yard every Saturday night, I just did it each weekend because I loved the music Luci put together in her sets, loved the bluesy people and love the club that Kiff & Dina have done so much to bring to our second world.

Unfortunately, Saturday night was one of those mysterious nights in Second Life where all kinds of weirdness plagued the grid. There were sim crashes just about everywhere Tak & I went, and just before we arrived at the Junkyard, Then it was show time and despite the crash of the south sim, the Luci show began. None the less the show went on and Luci spun our one of her amazing sets. I took a couple pictures but for most of the show, peeps were either poorly rezzed, half-rezzed/gray or just faint clouds trying to rez.

Yess’m, that’s us all gray and stuff, but the beeps who did come out onto the grid had a lot of fun making jokes about LL reviving bugs from 2007. /me shakes her head 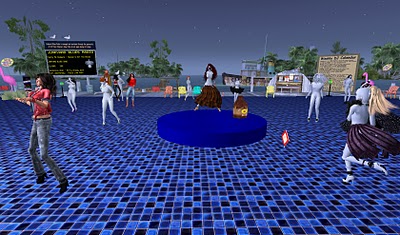 That’s me on the left (red jacket) doing my hosting thing, and Miss Luci on the DJ stand spinning great tunes.

I first started hosting back in early 2008 when I worked at Magi McBride’s clubs. I’m not sure I’d have ever gotten into hosting if she hadn’t created that opportunity for me. I was a “retired” hostess during 2009 but at the end of that year I felt a need to get back into the game. So, it was such an honor to be asked to help out on the Miss Luci Show, and I did. The thing is, I think hosting is sort of a built-in personality trait. I know that might sound nuts but personally, I just love extending hospitality to guests and I can’t find any other explanation for it.

I'm an avatar from Second Life and gamer on Xbox. I'm also the author of The Temporal Expeditions sci-fi novel series.
View all posts by Yordie →
This entry was posted in Journal and tagged Nightlife, Second Life. Bookmark the permalink.
%d bloggers like this: