It’s Saturday Morning and I just logged in. Tak is learning building skills and he’s very good. I like watching him work while I work on my blog post. 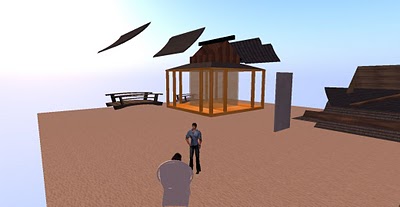 This is our sandbox in the sky and that’s tak’s building project. I’m so impressed with what he has accomplished in such a short time. 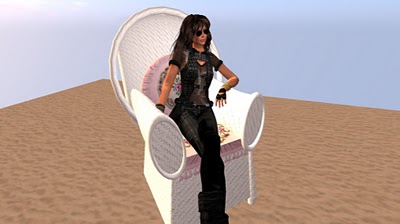 Tak just took this picture of me sitting at the edge of our sandbox merrily working, blogging away on this post. hehe

It’s been a fast moving week. I didn’t take Monday off like I usually do because I needed to work on the geisha show for the party. Then Tuesday Leanna, Magi and Thor joined Tak and me at the garden to rehearse. It took a lot longer than I had anticipated because the Geisha Dance Hud was a bit like a wild beast with a mind of its own.

Thor suggested that I take the dances out and drop them into my Huddles, but there were special moves in the dance hud, meaning I’d have to choreograph the dances if pulled them into Huddles. Nonetheless, I finally had to and the results were much better, even though my choreography was a bit less than delightful, at least when I pushed the start button it worked.

There are a few really cool things that happened that I’d like to make note of. First, Thor & Leanna opened The Smokey Mirror Clubhouse. This clubhouse is packed with games including Texas Holdem, Monopoly and much more, including the Chess set I lent to him. I’ll be writing more about Smokey in the future but for now I just want to shoutout to Thor & Leanna — chYEAH!

Also, on Thursday night, Tak & I beamed into Fiery Otaared’s pre-birthday Birthday Party. hehe. It was over at Wharf Rats and I shot a photo of the Fiery gal. 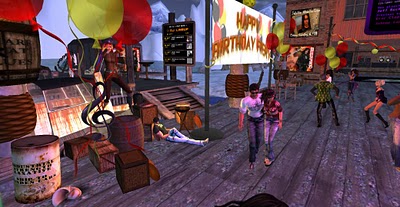 Then last night, Tak and I made our way over to The Still. It was the Stratman from Stratmandu at the DJ post and he was spinning out some heavy rock. The regulars rolled in and it felt like the weekend was officially beginning. 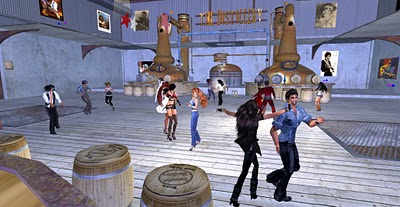 Friday nights at The Still, signifying it’s The Weekend.

This morning, I’m so glad that Tak is having fun building. I’m loving watching him because I don’t have any energy in my tank or many thoughts sticking in my mind. I do know that it’s been a fun week and I’m happy as a clam just sitting here.

Tak and I will be away from SL much of the evening. /me waves bye for now

I'm an avatar from Second Life and Xbox gamer. I wrote the sci-fi novel The Temporal Expeditions, and am working on book 2 of trilogy.
View all posts by Yordie →
This entry was posted in Journal and tagged Creating & Building, Nightlife, Parties, Second Life. Bookmark the permalink.