Our Trip To Egypt

There are many amazing regions of Second Life and Tak & I consider ourselves SL world travellers, so it was time for us to reach out for a new place to explore. Tak found a most amazing place, Ancient Egypta, a three-sim region with all the things you’d expect including pyramids, deserts and amazing cities. We only spent an hour or so exploring this new land, but we made many discoveries in that time. Btw, there is a way into the giant pyramid but you’ll have to find your own way in.

Yess’m, that’s me just looking around, pretending I don’t see that giant pyramid yonder across the desert at Giza. 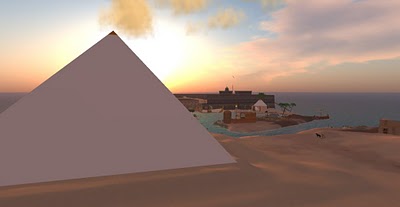 Naturally, Tak & I headed straight for that pyramid and we even found our way into it’s stunningly beautiful burial chamber. I could tell you how to get in, but it would spoil the fun for you. Yes, in ancient Egypt the pyramids had smooth white surfaces.

Instead, I decided to show you some photos of the beautiful city of Armana that fills an entire sim.

We entered the city center where there were many wonders to see. There were even some apartments for rent and we considered renting for awhile, but we just have too many homes right now.

All over the city you find great works of art.

Tak remarked that there is a predominant emphasis on color and that it made sense when considering all the desert surroundings. Makes sense to me too.

I shot many photos but we’ve only scratched the surface of this beautiful sim group. Nonetheless, the Ancient Egypt sim group is a candidate for my Wonders of Second Life page. More of this to come in the future.

I'm an avatar from Second Life, a gamer on Xbox, and the author of The Temporal Expeditions sci-fi novel series.
View all posts by Yordie →
This entry was posted in Exploring and tagged Beautiful Regions, Exploring, Photography, Second Life. Bookmark the permalink.