A Difficult Weekend, A Fun Weekend

I’ve been having a problem with my DSL provider for the past month, basically something is happening regularly that drops my connection on average every couple days but the worst part is I’m experience radically substandard download speeds. My service should provide 1.5mbps – 3.0mbps, but instead I’m getting consistent readings of 1/3rd to 1/2 of that, or around 600-750kbps. Oddly, my upload speeds have been consistently near the promised range, 700kbps.

This service issue has made my SL problematic. For example, on Friday Tak & I tried to attend a cool live concert that was being streamed into the Still. I didn’t have the bandwidth to be inword and watch the vid, so it was just a radio program for me while others watched the live show. Or last night when we tried to go to the Junkyard for some music and dancing, I had to relog 2 times after I arrived just so I could rez. The worst part of the problem has been the inconsistency.

Nonetheless, Tak and I always find ways to have fun inworld and we did catch the Queen tribute band show at Pillars of Hercules on Friday night, also went over to Ambrosia for some dancin’ and prancin’. 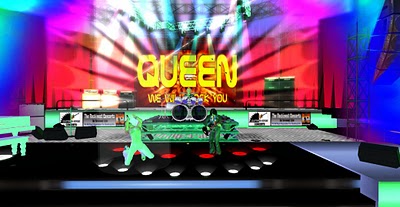 There he was, Freddy Mercury (played by Mars Chemistry) and the whole Queen crew.

And there’s Tak and me doing our dancin’. What you can’t see is the terrible lag related to my bad connection speeds.

Yeah, that’s my man with his shirt off and those toos of his, as we did our thang at Ambrosia.

It was a good crowd and I enjoy the change of pace.

For the remainder of the weekend tho, we decided to immerse ourselves into our roleplay experience at Hosoi Ichiba. More on our roleplay soon.

I'm an avatar from Second Life and gamer on Xbox. I'm also the author of The Temporal Expeditions sci-fi novel series.
View all posts by Yordie →
This entry was posted in Journal and tagged Nightlife, Problems & Issues, Second Life. Bookmark the permalink.