The purchase of the Ramenshop has been an enjoyable addition to our lives in Kansai, it has been yet another beginning and again, new doors have opened. However, we realized that it is important to establish a layer between ownership of the Ramenshop and actual running of the business. My husband is a samurai of the samurai class. And even though he owns many businesses, we will not allow ourselves to be identified as merchant class. First and foremost, my husband is a samurai who has fought bravely in many battles and the ownership of businesses must not blurr that distinction. 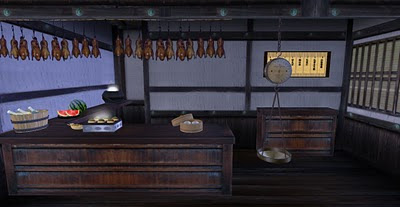 Takamatsu and I invested in a larger inventory of goods to sell at the Ramenshop and the shop has continued to be a popular food store and cafe. 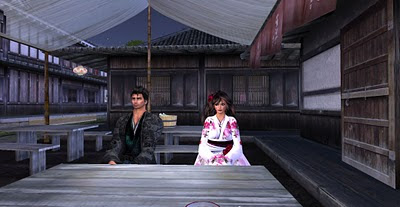 And so it was that one evening Taka asked me if we could get a member of my family to be the proprietor of the shop, thus removing ourselves directly from oversight of the shop’s operation.

The Ramenshop has clean, comfortable seating inside with the warmth of the shop, but it also opens upon a covered public square with many tables. Often as the winter weather has moderated, Taka and I have sat there and talked.

And in the past week, we have had the pleasure of meeting a local farmer and that same week I spent time talking with a woman who lives nearby, she is a unique woman because she is samurai. Despite the differences in our roles, the woman and I enjoyed pleasant conversation but at this point, our conversation must remain private.

In addition to our work in taking over the Ramenshop, we’ve spent time at other important gathering places in the town. Several times now, we’ve dropped by Spot sans’ Sake House. The bar is located on the other side of the Kabuki Theater and in the evenings it draws a unique group of patrons. 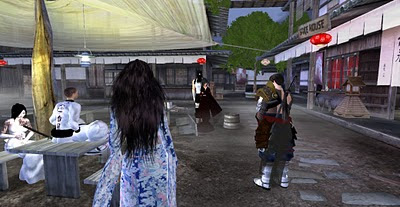 A few nights earlier, my husband had asked me to meet him at the Sake House. Unfortunately, I arrived early and had to waited for my husband. I saw many warriors and others I did not know. 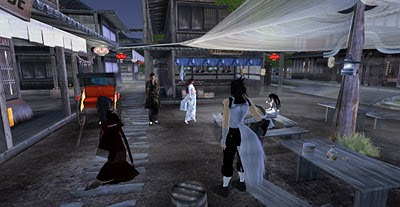 I was relieved when Taka arrived.

In the minutes before Takamatsu’s arrival, a woman in the Sake House group asked me for my soul. She said this openly and blatantly in front of all present, and I found this terribly disturbing. Although honorable proprietor, Spot san was nearby, the woman left me with an eerie discomfort and realization that even in this lovely town there is danger.

Again and again, just when we feel we understand this beautiful flowertown, something happens and we learn more about the secrets that are in plain sight.

by Yordie, wife of Takamatsu Soke
(click on “A Story” tab for full story)

I'm an avatar from Second Life and Xbox gamer. I wrote the sci-fi novel The Temporal Expeditions, and am working on book 2 of trilogy.
View all posts by Yordie →
This entry was posted in Writing and tagged Adventure, Geisha & Samurai, Photography, Role Play, Second Life, Stories, Writing. Bookmark the permalink.