On Friday night, Tak and I danced at our Harvest Moon Cafe. It was a celebration but it was a very sad occassion too. Yordie’s Zen Garden and the Cafe have played leading roles in Taka & my lives. Tak and I were married in the garden. We threw parties here at the Cafe. Tak created our first winter here, and as early spring arrived we worked on upgrading the garden like never before. But all of this would end and there would be no coming back.

Only hours earlier Tak and I had been to Gracee’s Birthday Party. We danced and carried on as if the merriment would go on just as it always had. We chatted about plans for the future. We talked about what getting our own sim someday or perhaps just a larger plot. We dreamed. 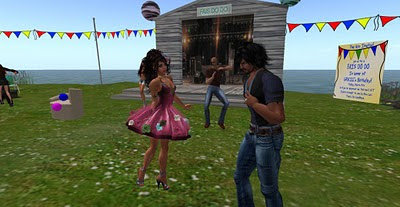 Our dreams seemed to be distant, but after the party Tak thought it would be interesting to see what kinds of lands are actually available. He said, would we be able to improve the garden if we had twice the land (a quarter sim)? And before I knew what he had on his mind we were hopping around from plot to plot, here and there. As we arrived at each plot I explained the pluses and minuses of each, and the pickin’s were slim. Ntl, toward the end of our expedition we found a couple of reasonable pieces in a row. In fact, when we found a very nice 16k meter plot on the relatively new continent of Gaeta V.

We spent quite a bit of time there on the Gaeta continent. We talked about long term goals but as we talked I could sense that Tak was very enthusiastic about this land. So I went thru my land checklist and there were many pluses to this land. For one thing, it’s not so easy to find a square plot on mainland sims. As we analyzed we also began thinking out loud about buying the land. I mentioned that our tier is due on the Nishijima sim on Sunday and that meant we wouldn’t really have time to find a buyer. We figured that we’d have to Abandon the Nishijima land, and that meant the end of Yordie’s Zen Garden. Shortly after midnight, Tak and I decided to buy the new land.

As you can imagine, after purchasing the land our attention turned to dismantling our home and the garden. It was just a logical progression of the events of the evening, not much to think about. We headed to our new home (oh, I didn’t even get a chance to show you yet) and took our things back into inventory. A short while later, we headed to the garden where basically everything was part of my inventory. So, as I started taking the garden down, Tak headed to our new land to rebuild our new house. It was all perfectly logical and we threw ourselves into our work.

As I was taking down the teahouse it hit me hard. I felt all the work and all the history of that garden come crashing to an end. Yes, I told myself, “…but you’ll have this great new land with twice the space and twice the prims.” But the sense of loss I felt overpowered all other feelings, and I cried. After a few minutes, I got a grip on myself and told Tak I was hurting and asked him to take me dancing at our cafe for one last dance. 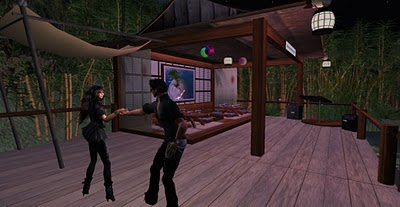 And so, Tak came to my rescue again and we danced at this place I loved so much. It was late at night and we couldn’t really finish anything that night, so we just danced.

The following morning, we took down Yordie’s Zen Garden and the Harvest Moon Cafe. We finished early and I sent out a notice to garden group members. I hadn’t eaten breakfast, so I was about to log but thought I should just abandon the land so I wouldn’t have to think about it after I returned from my meal. It did occur to me that there was an outside chance that someone might buy the land at the right price, so I halved what I had paid for the land and set it for sale. Amazingly, as I was about to log off a woman dropped into the garden and while Tak and I were saying goodbye she bought the land and began terraforming it before we realized it had been sold. A somehow fitting end to an wonderful chapter in our lives.

I'm a blogger and photographer on WordPress. I'm also author of the sci-fi novel The Temporal Expeditions, and am working on book 2 of a planned trilogy.
View all posts by Yordie →
This entry was posted in Journal and tagged Perspectives, Second Life. Bookmark the permalink.