The Royalty Among Us

Sometimes she walks among us in simple attired, other times she appears in the elegant attire of an empress. I met her several years ago as I travelled to this region for the first time, before she had made the decisions that shaped Hosoi Mura into what it is today. The artistry of her work told anyone who was paying attention that she was a woman with vision and determination. Also, she was and is a very cordial and gracious woman. We’ve chatted from time to time over the years and I felt a friendship with her, but one night this past week I got to know her again.

It was Tuesday night and Tatamatsu and I visited the Ramenshop to make arrangements for my cousin to take over as proprietor of the shop. We were just sitting there having some tea when a couple local residents arrived. And then she arrived, not in royal gowns, but in the simple clothes of an Ama diving girl. She is Amiryu Hosoi and she is the sovereign over all these lands. Naturally we bowed to her and expressed great honorifics, and she returned our greetings. 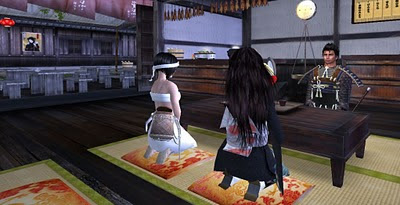 Upon arrival, Ami sama joined Taka and I at our table and our conversation took an unforeseen twist.

Ami sama explained her interest in Ama diving. She also spoke of travellers who had come to Hosoi in the past and wondered that had become of some of the special visitors. Then she told us an interesting story about the nearby Kabuki theater. She wanted us to know about a special spot above the front entrance, a small lookout post. Most people never really notice it, but because so many shows at the theater have some political themes, fights often break out. So, during shows a watchman is stationed in the tower to keep an eye out for fights. If he should spot a fight breaking out, he would slam is spear against a drum and that would summons the royal guard.

The stories reminded both Taka and I that there is still very much we do not know about this region. And when Ami had finished her stories, she asked Takamatsu to tell a story of his own, perhaps of his battles. I could sense my husband’s surprise, but he began by saying that he never speaks of the battles he has fought in. Instead, Taka explained that he would tell a story of love. When he did this he looked into my eyes and I blushed.

By now more people had joined our small party in the Ramenshop, but regardless of the audience Taka began the story of how he and I had met and how he had fallen in love. He mentioned how he discovered my garden and how he had become fascinated, but as he got to the romantic part he paused and for one of those rare times, he was speechless. A few moments passed then he said,

“Now Yordie, it is your turn.” And he smiled.

Ah, my Takamatsu passed the storytelling to me! For a moment I was speechless too, but I quickly picked up the story of our romance went forward. I told of a moment in time when I had fallen hopelessly in love with him. For some reason I found myself fearless as I spoke and I hurled myself into my story. I told of a day of great sadness and then how Taka had come to my rescue. And I told of the wonder of that night I fell in love. 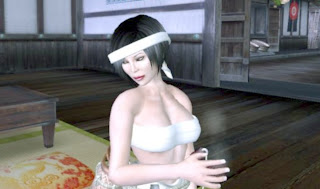 When I spoke of the sadness in my story, Ami sighed. Then after my story she told all of us a sad story of her own. She told us a dear friend who had passed, and whose life was memorialized inside the great market.

And that’s how it was that evening. It was unexpected; neither Taka or I had ever found ourselves called upon to tell a story. It was enlightening, in that we all learned something about each other. It was an enjoyable evening. 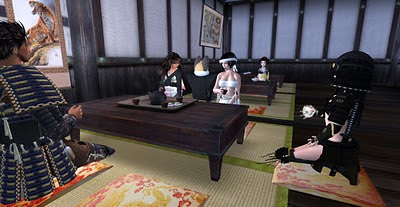 The Ramenshop filled with guests including the proprietor of the Sake House and the okaasan of the Okiya.

As she parted for the evening, Ami sama whispered to me, “It’s just Ami.”

by Yordie, wife of Takamatsu Soke
(click on “A Story” tab for full story)

I'm a blogger and photographer on WordPress. I'm also author of the sci-fi novel The Temporal Expeditions, and am working on book 2 of a planned trilogy.
View all posts by Yordie →
This entry was posted in Writing and tagged Adventure, Geisha & Samurai, Role Play, Second Life, Stories, Writing. Bookmark the permalink.