There will be a new Yordie’s Zen Garden soon. Actually, there have been four (4) prior Yordie’s Zen Gardens. The first was at Rieul in 2007 with 1024sqm. Next came Gayltsen in 2008 with 2048sqm, then Chodron in 2009 with 4096sqm. In 2010, the garden in Nishijima was 8192sqm. And the new garden will be 16384sqm. See the pattern, each time the garden moves it grows larger (doubles). So, I’m pleased to report that the new garden is coming along nicely and should be open by month end, but till then the following photo will have to do. 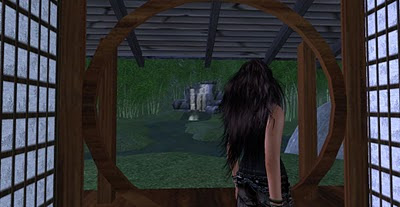 Here I am looking thru the window of one of the new features (a pavilion built by Tak) at the new garden.

I'm an avatar from Second Life and gamer on Xbox. I'm also the author of The Temporal Expeditions sci-fi novel series.
View all posts by Yordie →
This entry was posted in Journal and tagged Creating & Building, Second Life, Zen Gardens. Bookmark the permalink.