Taka and I have been trying to get back into the swing of things. My broadband problems are still pretty bad but I’ve found ways around some of the problems, and Frontier Communications did promise that they’d have the “bottleneck” cleared up in the next few days. Also, for the past month Taka and I have been very busy landscaping and creating the new Yordie’s Zen Garden at Yemple. So, my Internet problems and our building activities have kept us away from many of our favorite activities, especially my friends.

Well, last night, my Taka pulled a surprise on me. Oh it was a wonderful surprise, but it caught me completely by surprise. hehe

Last night, Taka and various co-conspirators saw that my Rez day was near and decided to have my Rez day party right before the BFA fundraiser. Now, for this to happen there were a lot of conspirators like Magi McBride and DJ Bree Windrum and of course, Leanna & Thor, but even Tymus Tenk. And I’m not sure how many others but since no one tipped me off, they were all conspirators in my book. (I love you all).

Oh my! There were such suspicious activities going on! For one thing, Taka made sure I was preoccupied with running around looking for a new dress. And Magi had me convinced that we’d need a quick meeting at the garden. Sooo, clever they were! Well, Taka and I had finished our shopping and I had on a new dress and we were sorta killing time at the garden when Taka said, ok, let’s go. It happened just like that. So I said, sure.

Naturally, as I tp’d into The Glass Pavilion at Calas Galadhon I didn’t notice the giant banner over my head. /me shakes her head 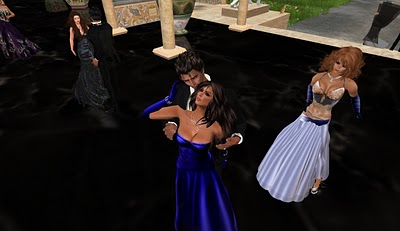 As I was about to start dancing with Taka, someone said, “Happy Rez Day” and then someone else and more and more, and I’m thinking, “huh?”. And silly me, still naive and unaware, I said, “No, it’s not my rez day.” And this brought a lot of laughs and someone said, “Oh yes it is”

Ok, finally, I got it. And there was Bree Windrum, spinning tunes that sounded like they came right off my favorites list. And as I looked around I saw Magi, LeLe & Thor, Eth, Tippy, Kiz, Gracee & Dest, Merrymay, Cookie, Clover, Kitten, and yes Tymus his self. And then came QQ, Lexi & Landon, Hans, Dillon and Ellie, then by the end of the party many of the BFA friends arrived too. It was just a great crowd. 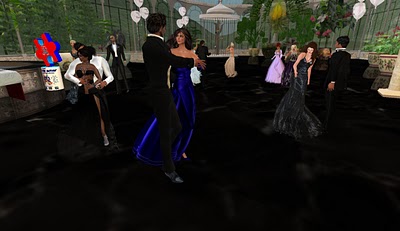 Thank to the folks who could make the time for my 4th rez day party. I really appreciate it.

I'm an avatar from Second Life and Xbox gamer. I wrote the sci-fi novel The Temporal Expeditions, and am working on book 2 of trilogy.
View all posts by Yordie →
This entry was posted in Journal and tagged Community, Friendships, Parties, Photography, Second Life. Bookmark the permalink.