There was a storm of political attacks and accusations, the town’s landlord lashed out at the samurai. There were yakuza threatening the merchants, and samurai confronting the yakuza. A darkness was felt everywhere, even among the ever peaceful and serene geisha. And in the shogun’s absence, the darkness spread over the lands of Chubu, with more and more bandits & vandals taking advantage of every opportunity.

The sun would shine through the Spring rain clouds, but there was a darkness deep inside our flower town.

Many people knew these things were happening. Those of us who could, visited relatives in other regions. Only Masumi-san took action, organizing a group of maiko and geisha for a show at the kabuki theater. The show was called “April in Kyoto” and once again, she invited me to perform with the ladies of the okiya. I looked forward to performing again and hoped it will help settle the town and bring residents out into the light again.

The geisha floated across the willowy world with greatest precision and artistry, but few of the residents came to the show. In these days, many rarely left their homes.

Rumors of political maneuvers abounded. Members of the town council, which I joined only a few months ago, were either silent or had left town for undetermined periods. Town businesses closed early in the day, yet the Nakanoshima Okiya maintained it’s schedule and the only life in our village was within the okiya walls at the tea house. 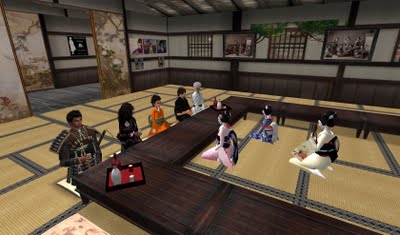 My honor and I joined guests at the tea house for some refreshment in the evening, but even in that joyful environment there was fear.

Takamatsu continued to await his audience with the shogun to discuss his commission as a Keibatsu samurai. I could tell he was becoming increasingly concerned, then surprisingly he began wearing armor in the evenings when we were in town. This was so unlike my honorable husband. So, despite my cheerful outer shell, I was becoming more and more concerned about the direction things were heading.

My training in the martial arts continued. I hoped to reopen the Ramenshop as soon as we were sure of security. I encouraged cousin Koniki chan to join in Taka’s training, but the notion of taking up a katana filled her with terror. In my heart, I felt that there might come a day when I will have to defend my cousin.

I look at the future with hope, but temper it with caution.

((Only one more episode remains…))

by Yordie, loving wife of Takamatsu Soke
(click on “Story I” tab for full story)

I'm an avatar from Second Life and gamer on Xbox. I'm also the author of The Temporal Expeditions sci-fi novel series.
View all posts by Yordie →
This entry was posted in Writing and tagged Adventure, Geisha & Samurai, Photography, Role Play, Second Life, Stories, Writing. Bookmark the permalink.
%d bloggers like this: