It was Labor Day but it felt more like a second Sunday to me. All I knew was that my human didn’t have to get out of bed at 5:30am to go to work (well, it feels like work). It was a slow, easy, late breakfast kinda morning and a generally lazy day, all day.

When I got inworld I had a chance to chat with my new friend, Duncan Bagley. Duncan performed at Calas Galadhon on Saturday night and since we met, we’ve squeezed in time to get to know each other during the weekend. So, on Monday morning when it turned out that Duncan was performing at The Dolphin again, I decided to head over there and catch his show.

There was a nice crowd at the Cafe. Miss Magi made her way through the Texas fires and Dillion was there to make sure Magi was ok (whatta guy!). I arrived just as Duncan started his set. 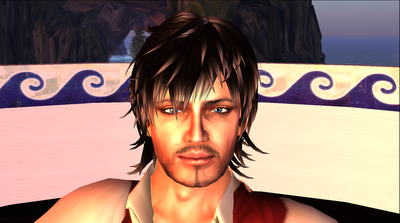 Duncan began singing in those deep, mellow tones that have made him a popular performer at The Cafe. He has a broad and deep repertoire of folk music and it was perfect for a Sunday morning. 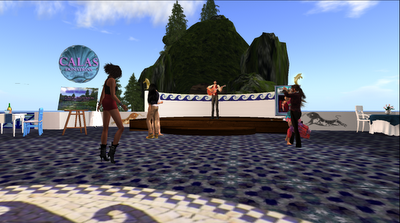 Again, I enjoyed Duncan’s music and was really glad he and I were getting to know each other. But when the show was over, I had to return to real life.

It was a much needed three day weekend. My human had been trading the wild stock market swings for several weeks, and despite the excitement of the swings, she was exhausted. So for most of the weekend she spent our time unwinding and resting. Ntl, in the afternoon she let me returned to SL (ok, yes, I know we are the same person… ok? /me giggles).

When I got back inworld, I knew it was time to hookup with more of my old friends, and my old life. I especially wanted to get back into some great bluesy music, and that meant it was time to head over to Junkyard Blues. In fact, it had been a month since I caught a show, and I wondered if anyone would even remember me. Fortunately, Leanna joined me and together we made our appearence.

Miss Luci was spinning for a great holiday crowd. Gracee and Gala were there and Luci remarked to me that she had her Posse back together. For those who don’t remember, I was one of Luci’s original Posse members.

LeLe tp’d in Tippy and Tippy tp’d in Q, then I saw Duncan come back from dinner and I asked if he’d like to join us and he did (that’s him in the center). And I was delighted to introduce my new folksy friend to my old bluesy friends.

Our group danced for a couple hours. More and more Junkyard friends poured in for Luci’s great bluesy tunes. I could tell she was very happy with the holiday turnout. And I was thrilled that Duncan really got into the blues. Then DJ Sasha took over the reins from Miss Luci at 6pm and the party continued. It’s hard to believe I had been gone from the JY for so long. It was hard to believe I was thinking that I was finished with SL, that there was nothing new to capture my imagination. I think the planets must have been aligned just right and I’m very happy to be back.

I'm an avatar in Second Life and Xbox. I'm also the author of The Temporal Expeditions sci-fi novel series.
View all posts by Yordie →
This entry was posted in Journal and tagged Friendships, Nightlife, Second Life, Talented Artists. Bookmark the permalink.
%d bloggers like this: