A Very Grand Opening at Oz

The grand foyer of the nightclub Oz. Yes! An instant immersive experience!

I arrived early at Oz, somewhere over the rainbow and way above the chimney tops, in the Calas sim group. The beauty was staggering and I was instantly transported. As you can see in the photo above, Oz is an Art Deco nightclub out of the 1930s and the dress was 1930s era formal. The colors and decor were truly breathtaking and I got out my camera and began shooting and continued deep into the evening.

Inside the club, guests began to arrive. The stage was every bit as stunning as it appears in this photo!

The lovely Sultry Sonata opened the show with her beautiful, moving songs. Her performance filled night with liveliness and joy. 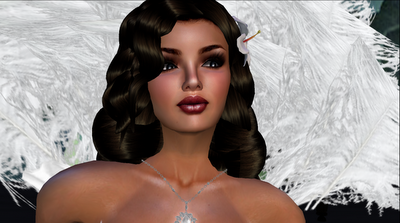 Sultry was gorgeous, her costume was spectacular and her singing was seductive and truly sultry. 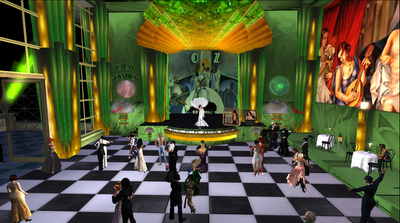 Oz filled with guests and virtually everyone had taken the time to find appropriate attire, further increasing the sense of being immersed in a special place and time.

I was seated at a most delightful private table. And immediately I began shooting photos and taking notice of all that was going on. That’s my new magical hat and dress (right). Oh my how that hat makes me feel… like a celebrity! I sat there with my special mystique, sipping the fine champagne recommended to me by the ever gracious club owner Ty Tenk.

(It was Tuesday night and I was not in Idaho… or Kansas.)

There was a brief intermission and then Antonio Galloway appeared on stage and began singing with his finely polished voice. I’d seen Antonio perform before but wasn’t prepared for what followed.

After a wonderful selection of song, Antonio began a medley of songs from “The Wizard of Oz” and it was a show stopper. It was clear that he had seen Wiz more than once because when he got to Munchkin song, he had the audience rolling on the floor with laughter with his vocal impersonations.
It was a brilliantly thought out and executed performance.

The club was packed with an average of more than fifty peeps all night.

Toward the end of the evening, even owners Ty & Truck took a few moments to enjoy their creation and danced. When you consider all that these two men do for Second Life, I hope you’ll contribute to the charities they support
(just tp to the entrance of Calas for kiosks). 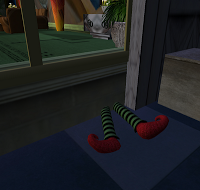 As always, club manager Magi McBride saw to the details to make the event a success. I’m not sure how often the club will be open, but after last nights show I plan to visit as often as possible. Thanks you Truck Meredith & Ty Tenk, for all you do!

Oh, there’s one other thing; while I was leaving I notice this –>

I'm an avatar from Second Life and Xbox gamer. I wrote the sci-fi novel The Temporal Expeditions, and am working on book 2 of trilogy.
View all posts by Yordie →
This entry was posted in Events and tagged Nightlife, Photography, Second Life, Socialite, Talented Artists. Bookmark the permalink.