It really begins weeks before Halloween and there are some who carry Halloween forward even after Official day of ghouls and witches. But regardless of when it begins or ends, Halloween is the Second Life National Holiday. Forget the SL birthday and everything else, this is the one event that engages more people out of their routines and turns their thoughts to eery, spooky stuff and to costumes! And let’s face it, you just can’t make costumes like we make here in Second Life.

Halloween isn’t until Monday but for the parties began this past week, so I’ll be writing about the goings on for the next few days. For me, I’m off to a slow start this year because I’ve only bought one new costume. Here are some photos of events I went to through Friday.

Here’s a scene from Dest & Gracee’s 2nd annual Halloween party,
with a wild group of other worldly, bluesy creatures.
That’s me and my date (lower right); we’re the translucent, ghostly duo. 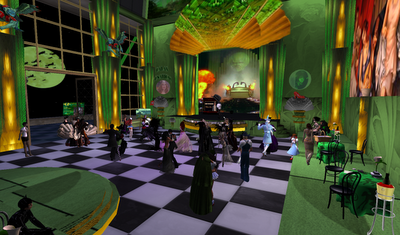 Then it was Thursday night and there was no question what the theme would be at Oz! Oz featured two hours of live entertainment and this was a night for Dorothys, Totos, Wicked Witches, Scarecrows, even a Emerald City guard and much more. Again, check the photo collection at Flickr!

So, the parties have begun and I still need one or two new costumes. I just checked and I don’t really have a Wicked Witch costume in my closet… hmmmmmmmmm.  /me slips into her shopping shoes

I'm an avatar from Second Life and gamer on Xbox. I'm also the author of The Temporal Expeditions sci-fi novel series.
View all posts by Yordie →
This entry was posted in Events and tagged Events, Halloween, Nightlife, Parties, Photography, Second Life, Socialite. Bookmark the permalink.
%d bloggers like this: