I’ve been going to Ambrosia for over a year now. And right off the bat I have to say I’ve enjoyed the club’s DJs, variety of music genres (rock, classic rock, techno, hiphop, much more), great hostesses, awesome peeps and it’s inimitable owner, Phil ™ Kearney.

In the early days I didn’t know Phil was also a DJ, didn’t even know he was the owner. I mean, he tags himself as “Club Manager”, but one night earlier this year he took the stage and not only did some great spinning but also he had me ROF,LOL with his endless stream of whit and occassional bawdy remarks (I won’t repeat what he said here on this PG blog… but you can ask me inworld). 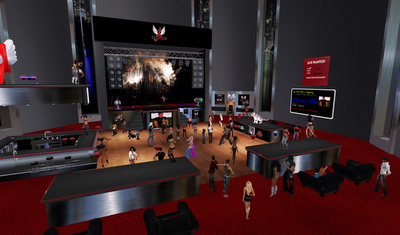 The scene at Ambrosia on any given night.

A couple weeks ago I had a chat with him when things were slow and got to know why Ambrosia and his other ventures are so successful. It wasn’t like an interview, but I learned that Phil is intent on running his ventures like businesses. And dispite his clowning around at times, he’s got a clear sense of where the lines should be drawn on behavior at his clubs.

I’m pretty sure that anyone whose been to a Phil Kearney show has plenty of memorable Phil remarks and incidents to carry away with them. Like I’ll never forget the night that there was a guy giving Phil griefer, so Phil quietly began opening a hole in the botton of the floor, under the guy till the guy fell through and tumbled to his death thousands of feet below. hehe. But Kearney isn’t like a mean guy, when the guy came back he welcomed him back. The thing is, the guy learned his lesson. hahahaha.

So, in honor of Phil Kearney and his amazing clubs and malls, I’m profiling him tonight here and giving notice to all who haven’t heard yet, he’s opened a new club, Grind – romantic dance club. Grind is a club for millionaire and such. “It caters to an upscale clientele who arrive by Helicopter or yacht.” It’s only 7 days old and I haven’t seen it yet, so as soon as I can get an “upscale” date, I’ll be heading over there for some dancing and prancing.

Phil Kearney spinning tunes at his flagship nightclub, Ambrosia. And the girls threw their panties at him all night long. All night long! hahahahaha

Ok, something new with more to come…

*that’s my “Heard On The Grid” rating

I'm an avatar from Second Life and Xbox gamer. I wrote the sci-fi novel The Temporal Expeditions, and am working on book 2 of trilogy.
View all posts by Yordie →
This entry was posted in Features and tagged Nightlife, Second Life. Bookmark the permalink.