A few nights ago, PIER, a nightclub that has been closed but not gone for over two years, came back to life for one night. It started like this, Carys Doolittle (the owner) sent out a single word over the PIER group and it went something like this, “Wow.” And as luck would have it, I was the first person to respond with my own, “Wow” and then others joined in and then we started showing up at the old club still the same as it was years ago. 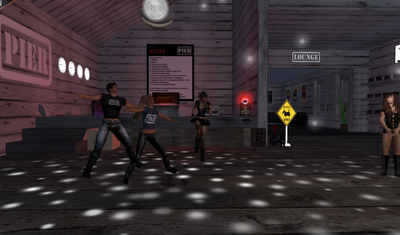 As people began to arrive, JustOneMore Loon took the stream and began spinning a great set of tunes reminiscent of the old days at PIER.

That’s me in my PIER t-shirt and Magi (new to PIER), dancing and prancing as the sun set out on the sea.

It was a small crowd, 15 to 20 peeps, coming and going to take a peek as they heard the place was open. Magi and I were there for a couple hours, but it stayed open much later. LeLe (another old PIER peep) said when she went it was large group.

And there was Carys, now married to a Texan and living in USA, mulling what was happening and whether she would open the PIER for real.

PIER is the first nightclub I went to in Second Life, back in 2007, where I felt really welcome. In fact, the peeps at PIER taught me the meaning of Second Life hospitality, a lesson I carried with me as I became a hostess.

Things weren’t always great, there was a period where DJ’s moved further and further away from rock. And then began digging deeper and deeper into hip hop, especially the brand I refer to as filth-mouthed hip hop (that’s the polite term).

But PIER always that special feel, out there over the sea and if you had enough sense to set your Sun to sunset or night, there was magic. I’m not sure what the future holds for PIER, but I think it would great to come back here.

I'm an avatar from Second Life and gamer on Xbox. I'm also the author of The Temporal Expeditions sci-fi novel series.
View all posts by Yordie →
This entry was posted in Journal and tagged Nightlife, Second Life. Bookmark the permalink.