Ok, this blog is for commentary, sometimes criticisms, for technical issues, less about being an avatar and more about what Second Life is and should be.

Earlier this morning I wrote a post about my avatar experiencing the Second Life Wilderness. I found it to be an enjoyable experience and I have several ideas about how to enjoy this place. However, there are several incongruities and some silliness that caused me to wonder what the purpose of the Wilderness actually is.

This is the Silly Wilderness Monkey
waiting nearby the entrance.
It is not LL’s best work.

When I arrived I was ready for adventure in my hot little flight suit, but I tried to keep in mind what a new Premium member might see.

The Silly Monkey
And the first thing that threw me for a loop was a silly monkey, I’m calling him or her Silly Monkey. Here’s where the incongruity begins.

All around that landing point there is an intriguing, inviting forest but the silliness of the animals inhabiting the place seem to say,  childish game.

I’ve seen this kind of childish representation at other LL developments (and I’ll get into those later this week), but it wasn’t just Silly Monkey it was also giant silly spiders and silly “snakes roaming the servers” (this came to mind, referencing back to Tateru Nino’s The Second Life Diaries post).

I have been trying to figure out how such a well thought out project of eight sims with an exceptional terraforming and landscaping that creates such an enticing environment could be infested with such poorly designed animal features, symbolized by The Silly Monkey?

The 2007 Level Animations & Poses
Then there’s this, every animation and pose I experienced in the Wilderness was circa 2007 at best. I say this only because that’s when I arrived in SL and don’t have an earlier reference point. I wonder why is this? I’ve read other criticism about this type of thing, why didn’t the Lab go to people who have the most highly evolved animation and pose technologies?

I can’t fathom it with one exception, perhaps the Lab is using this as a training ground for its own employees to learn from. I firmly believe the Lab employees need to Live the Life and part of that would be learning to build. I seem to recall comments made by either Rodvik or another high-ranking Linden expressing that idea in a different form.

Fine Quality Builds & Non-Sense
I don’t like this side of my personality. When I resigned from the tech world I didn’t want to be critical, I just wanted to enjoy my good fortune. But here I am being very critical and impatient, but I see such beauty mixed with non-sense. What am I talking about? Well, trampolines seemed to be everywhere and the one outside the little village is just mind boggling. What is the purpose of this? Maybe I just didn’t read the signs. I guess I was so confused I didn’t see the instructions somewhere. 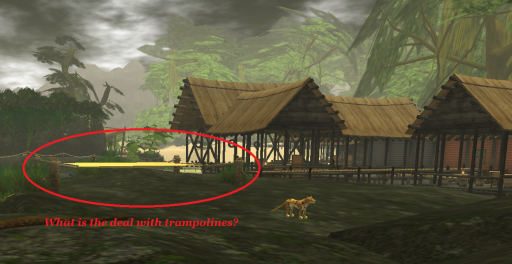 What is the deal with these tramolines?

That’s three things. I’ve said enough. There are other things I could say, but I’m just baffled at the inconsistencies I see. I’ve already praised the fine work the Linden’s have done, but I wish I could understand the seemingly strange choices that have been made.

More on this in another context soon.

I'm an avatar from Second Life and Xbox gamer. I wrote the sci-fi novel The Temporal Expeditions, and am working on book 2 of trilogy.
View all posts by Yordie →
This entry was posted in Exploring and tagged Exploring, Linden Lab, Problems & Issues, Second Life. Bookmark the permalink.