Yes, today is Second Life’s official 9th Birthday. And I’ve been hanging around observing things, sometimes from afar, sometimes right at the Welcome Area with greeters and I’ve done a lot of wandering around.

I actually climbed the hill behind Devet sim
wearing my high heel boots and no one was there.
It was a great place to just look at things;
well, as far as my 1024m Draw Distance.

Normally, I’m able to take on huge events with determination to see everything. But as early as the first day, Press Day, I found myself overwhelmed at the enormity of this event. I found myself lost. Of course I’ve done some cool things, like attending opening ceremony, dancing at the Egyptian nightclub and all that. But in general, I’ve felt lost, deliciously lost.

The feeling of being lost is the thing I’ve found to be the most wonderful part of SL9B. And standing on that hill with draw distance set to max and still not seeing everything, well, that’s a great symbol for what I mean.

So, by the third day I just accepted that I’d never see everything. And I started watching people, listening to them and every once in a while having a conversation. I wanted to know what people were experiencing. 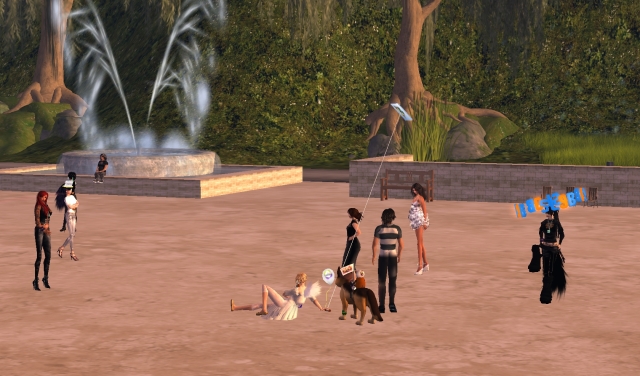 This is a pic from my first day hanging out at the Welcome Area.
I can’t say I had any deep conversations but
I heard a lot of people asking questions and commenting. 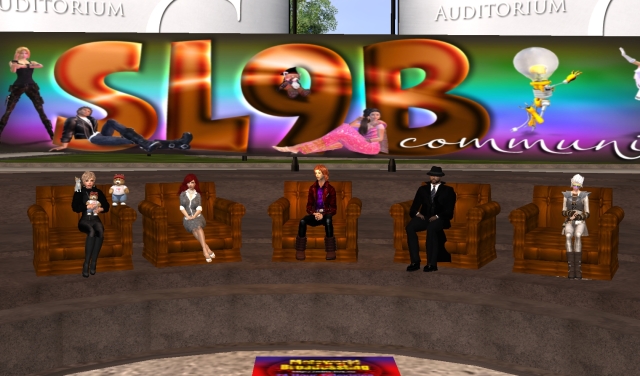 I even came upon these SL media stars recording a program.
From left, Saffia Wildershinns, Pooky Amsterdam, Mal Burns,
Kinte and Honour McMillan. Apparently no Trolls at this one.

Everywhere I went I heard a lot of interesting comments but nothing that really stuck in my head, other than the rumors I heard about Philip Linden I mentioned yesterday.  And even though nothing I heard was particularly memorable, well, I’ve felt this way before when I’ve been enjoying myself.

I am going back to checkout my impressions one last time before writing a piece I’ve had floating around in my head for days now. I want to write a special post about my impressions, maybe something a little more intellectual, and also comment on Linden Labs distance from this event. ((I know, I know, Second Life socialite Yordie Sands and intellectual in the same sentence… lawdy, lawdy.)) It’s a long story but Vanessa Blaylock offered me the opportunity to write a piece for her blog, I Rez Therefore I Am. And me being me, I thought this would be a dandy chance to say hello to a whole new audience.

Btw, the rumblings about Philip in SL were confirmed. Here is part 1 of an interview Philip did yesterday which also confirms, “he is not actively involved in Linden Lab and doesn’t know what work is being done.” And here’s Interview – part 2 where we learn he no longers cares.

I'm an avatar from Second Life and Xbox gamer. I wrote the sci-fi novel The Temporal Expeditions, and am working on book 2 of trilogy.
View all posts by Yordie →
This entry was posted in Events and tagged Community, Events, Photography, Second Life, Socialite. Bookmark the permalink.